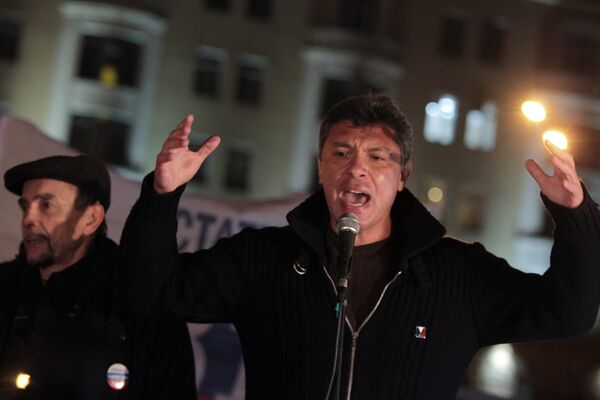 Moscow police officers detained seven people in downtown's Staraya Square who attempted to stage a rally in protest at the jailing of a prominent Russian opposition leader, Boris Nemtsov, a Moscow police source said on Wednesday.

"About ten people attempted to hold an unsanctioned rally on Wednesday at the Staraya Square supporting Boris Nemtsov. Police officers have detained seven protesters," the source said, adding that the administrative cases will be opened against those detained.

On Tuesday over 30 people were detained in Moscow and taken to a police station after staging a rally supporting Nemtsov.

Protesters have been rallying outside a jailhouse where Nemtsov is being held for three days.

The March of Dissent rallies take place in Moscow and St. Petersburg on the last day of every month with 31 days, in honor of Article 31 of the Russian Constitution, which guarantees the right to free assembly.