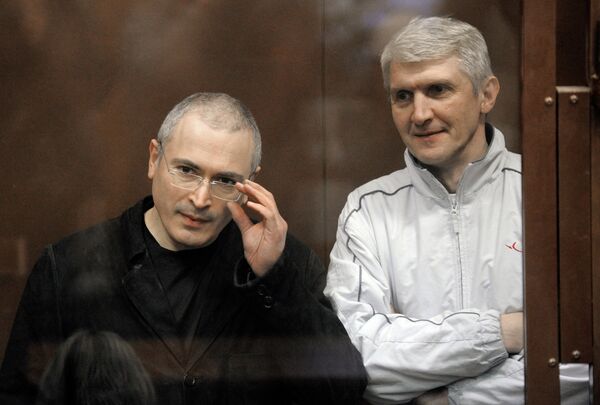 © RIA Novosti . Grigory Sisoev
/
Go to the photo bank
Subscribe
The lawyers of ex-oil tycoon Mikhail Khodorkovsky and his business partner Platon Lebedev, recently sentenced by a Moscow court to 14 years for embezzlement and money laundering, have appealed the sentence.

The lawyers of ex-oil tycoon Mikhail Khodorkovsky and his business partner Platon Lebedev, recently sentenced by a Moscow court to 14 years for embezzlement and money laundering, have appealed the sentence.

The lawyer for the ex-head of Yukos, Karina Moskalenko, sent an appeal to the Khamovniki District Court on its ruling to sentence the two businessmen, who have already served eight years of a previous sentence, and were sentenced to 14 years on Thursday for a second round of charges brought against them. The businessmen may be released from prison in 2017, taking into account their time already served.

"We request that a higher court overturn the verdict and stop the process of criminal charges [brought against Khodorkovsky and Lebedev] due to a lack of evidence of a crime committed," Moskalenko said.

She said that so far only a short version of an appeal has been submitted because the defense plans to submit a full appeal within the 10-day timeframe allowed by Russian law.

"In the short version of the appeal, we only express our disagreement with the guilty verdict and ask the Moscow Court to stop the process of the criminal charges against Khodorkovsky and Lebedev," Moskalenko said, adding: "A full version of the appeal with all of our arguments and grounds to stop the proceedings will be submitted; as soon as we get a copy of the sentencing, we will submit [the full appeal] because we have a number of claims against both the verdict itself and the court protocol."

Judge Viktor Danilkin delivered the sentence on Thursday after convicting Russia's once richest man Khodorkovsky of stealing 218 million tons of oil from his own company, Yukos, and laundering the proceeds, worth around $100 million.

Another of Khodorkovsky's defense team, Yury Shmidt, said after the trial they were planning to appeal since "the verdict is illegal, unjustified, not based on the real evidence and was made under pressure."