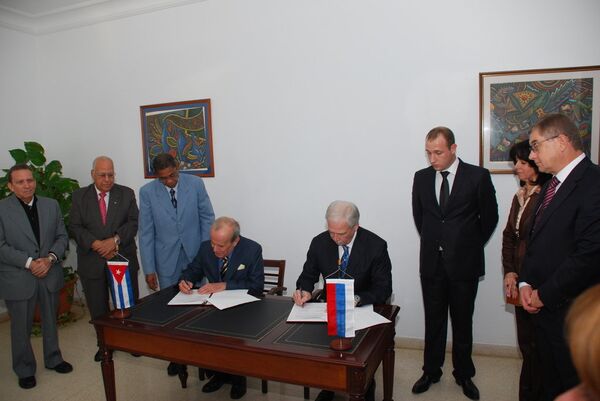 Russian and Cuban lawmakers have signed an agreement on inter-parliamentary cooperation to help boosting trade and economic ties between the two countries.

The document was signed on Thursday by Speaker of the lower house of the Russian parliament Boris Gryzlov, who is on an official visit to Cuba, and President of the National Assembly of People's Power of Cuba Ricardo Alarcon.

"This important agreement opens up new possibilities for broader dialogue and wider cooperation between our lawmakers," Gryzlov said at the signing ceremony.

Cold War allies, Russia and Cuba have recently moved to restore their ties which declined after the breakup of the U.S.S.R.

"Russian and Cuban lawmakers must play a more active role in boosting and modernizing trade and economic ties between the two countries," Gryzlov said.

The State Duma speaker reiterated that the current trade, which totals $260 million, does not reflect the bilateral trade potential, and Moscow is hoping to diversify its economic and investment ties with Cuba.

Joint projects in electric power industry, transportation, pharmaceutics and high-tech industry are among the key areas in bilateral economic cooperation, he added.