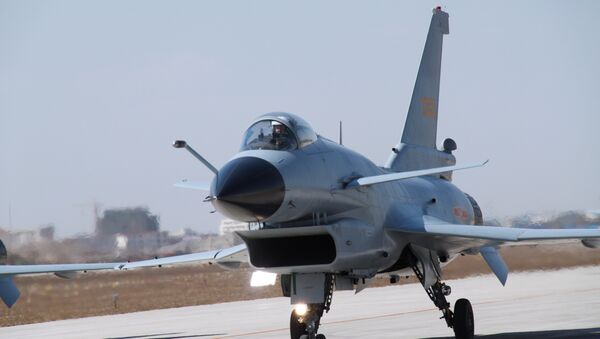 Both experts and amateurs who have studied the blurred photos of an unfamiliar fighter jet on a runway in China have concluded that Beijing has started testing its fifth-generation stealth fighter.

Both experts and amateurs who have studied the blurred photos of an unfamiliar fighter jet on a runway in China (http://china-defense.blogspot.com/2010/12/chinese-stealth-in-plain-sight-curious.html) have concluded that Beijing has started testing its fifth-generation stealth fighter.

The J-20 prototype is expected to rival the U.S. F-22 and the Russian T-50 fighters. But is China ready to start mass-producing the aircraft? How good is the prototype?

Experts call it a combination of the Russian and U.S. fifth-generation fighters, but that greatly simplifies matters. In the last 20 years, China has been working closely with Russia to develop a modern fighter jet. But the J-20 is not simply a copy of a Russian design. Rather China has tried to build a completely new aircraft based on the technology and knowledge it has gained during its years of cooperation with Russia.

The future of the new Chinese fighter will depend on several factors.

It is not clear what kind of engine the plane will have. Some say it will use the prospective Chinese-made WS-15 engine with a maximum thrust exceeding 18,000 kg, but the engine is still in the pipeline.

China has been unable to reproduce Russia's highly efficient high-temperature turbofan AL-31F engine, designed in the early 1980s and currently mounted on the Su-27 fighter and its modifications. The engines for Sukhoi planes manufactured in China are made in Russia and then assembled and adjusted in China.

The AL-31F engine is also mounted on China's J-10 fighter planes. The engine's Chinese analogue, the WS-10, is less efficient than the Russian prototype.

A fifth-generation stealth fighter must be able to evade radar, and so it must be made from modern composite materials. However, China does not produce such materials in commercial amounts, and experts doubt that it can develop and produce them for its Air Force.

Electronic equipment, primarily radar, in China stands at approximately the same level as its engines. Chinese designs fall short of the capabilities of their Russian, European and American counterparts. Although China has been gradually narrowing the gap, it still has to import modern electronic equipment for its aircraft.

The best aircraft radar systems are currently made for Russia's Su-30MKK fighters, and China will most likely copy this design. It is not clear how much it will differ in terms of specifications from next-generation Russian or American radar systems.

The guided weapons used in the Chinese Air Force were mostly copied from U.S., Israeli and Russian prototypes made in the 1960s through 1980s. China will have to spend a great deal of time and effort to develop its own weapons, even if it borrows elements of prototypes bought from other countries. But foreign producers are becoming increasingly wary of sharing their next-generation technology with China.

Since the 1970s, China has consistently lagged 15 to 20 years behind the world leaders in aircraft manufacturing. This was true of their third- and fourth-generation aircraft, and this appears to be the case with its fifth-generation fighter plane.

If the J-20 is accepted as the prototype for a new series, China will be able to produce a fifth-generation fighter plane within 10 years. If not, it will begin batch production no sooner than 15 or 20 years from now.

No one knows for sure what will happen, but it's certainly not too early to make predictions about the future of the new plane.

Given its traditional policy of aircraft manufacturing, China will most likely create a functional analogue of foreign-made 5G planes that will cost 50% to 80% less than Russian and U.S. models. China will most likely sell the plane in Central Asia, the Middle East, Latin America and Southeast Asia, as well as to the richest African countries.

The export models of the J-20 and the planes of that series made for the Chinese Air Force will have foreign, including Russian, equipment and weapons. Moreover, in the next 20 to 30 years China will have to continue to import modern aircraft technology. Despite the strides made by China's aircraft designers in the last 20 years, China has only slightly narrowed the technological gap dividing it from the global leaders.