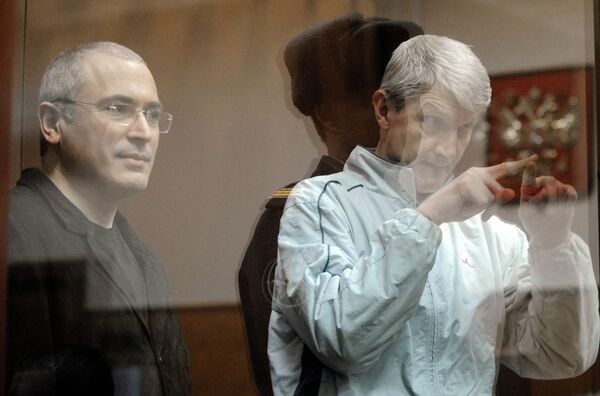 The reading of the verdict began on December 27, and Khodorkovsky's lawyers expect it to last until December 31.

The two men, who have already spent seven years in jail for fraud and tax evasion, pegged oil prices and "acted on a thoroughly thought-out plan," Presiding Judge Viktor Danilkin said on Tuesday.

They bribed several former Yukos shareholders and board members to remain silent, the judge said.

Khodorkovsky's lawyers and human rights activists say the judge was under pressure following a remark by Prime Minister Vladimir Putin that "a thief belongs in jail." Putin said he was referring to the first set of charges.

The United States, Germany and Britain have condemned the verdict, with the White House calling it a "selective application of the law."

The trial is widely viewed as a political vendetta by Putin, whom Khodorkovsky challenged by funding the liberal opposition in the early 2000s.

Khodorkovsky and Lebedev have always maintained that charges against them are false.