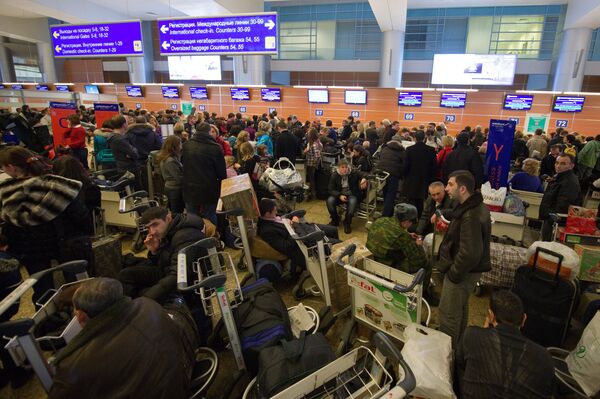 Thousands of passengers remain stranded at the airports following an ice storm that hit the entire territory of Central Russia over the weekend. Hundreds of flights have been canceled and delayed as severe freezing rain caused serious power outages. Some 20,000 passengers have been affected by the weather.

"The situation in the airports, according to our information, is inadmissible: prices for food have been inflated tenfold; airlines are not providing hotels or meals to clients, which is against the law," Zhorin said, adding that taxi fares have been illegally hiked as well.

"We plan to file a class action lawsuit from all those affected, which could be over 1,000 people, and the claim amount could be unprecedented for Russia," he said.

Zhorin said airport authorities are capable of influencing the situation with the growing prices in airports.

"We see collusion here and plan to prove it in court," he said.

Russian Transport Minister Igor Levitin criticized the Aeroflot management, saying he had "questions" for the company.

President Dmitry Medvedev has instructed prosecutors to check whether airport authorities and air carriers have taken "all necessary measures" to comply with legislation on air transportation and passenger services in emergency situations.