The Rise and Fall of Mikhail Khodorkovsky (Update 1) 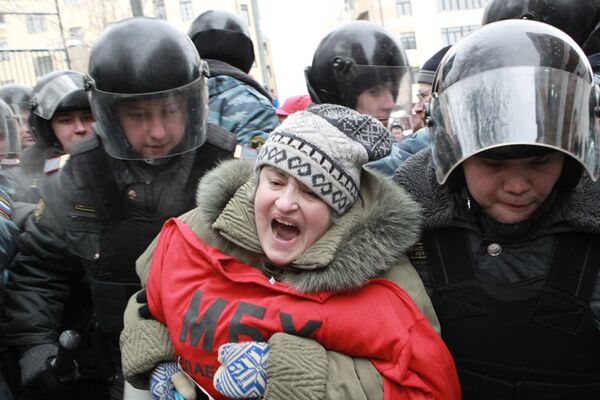 © RIA Novosti . Andrey Stenin
/
Go to the photo bank
Subscribe
Former oil tycoon Mikhail Khodorkovsky and his business partner Platon Lebedev were declared guilty by a judge at the culmination of their second new trial in a Moscow district court on Monday.

Former oil tycoon Mikhail Khodorkovsky and his business partner Platon Lebedev were declared guilty by a judge at the culmination of their second new trial in a Moscow district court on Monday.

Khodorkovsky and Lebedev, who have already spent seven years behind bars for tax evasion, are facing new charges of embezzling 218 million tons of oil from Khodorkovsky's former oil firm Yukos and laundering over 3 billion rubles ($97.5 million) in revenues.

Mikhail Khodorkovsky was born June 26, 1963, in Moscow, studied at the Mendeleev Moscow Institute of Chemical Technology, where he started building a career as a communist functionary, becoming deputy head of the Komsomol (the Communist Youth League) organization at his university.

Later, using his Komsomol connections, Khodorkovsky opened his first business in 1986, a private cafe, and then in 1987, the Center for Scientific and Technical Creativity of the Youth. The center imported and resold computers, as well as a range of other products.

By 1988, he had built an import-export business with a turnover of $10 million a year.

In 1989, Khodorkovsky and his business partners established the Menatep Bank.

In December 1995, as a result of the so-called shares-for-loans auctions, Khodorkovsky's Menatep Group took control of the Yukos oil company. A few years later, he was probably Russia's richest man.

After the 1998 financial crisis Yukos tumbled in value, but Khodorkovsky held on to the firm, dragging minority shareholders into courts to keep control of his empire.

Just two years later however, he was the darling of the Western stock markets, with a commitment to corporate governance, and an image makeover for himself - gone was the moustache and thick-framed glasses.

In April 2003, Khodorkovsky announced Yukos's merger with another oil giant, Sibneft, creating an empire that at its height produced more oil than OPEC member Qatar. The merger later came undone, but discussions continued on other possible mergers including with Western companies.

The times had changed in other ways, too. Vladimir Putin's ascent to the premiership and then the presidency meant that the days of the oligarchs calling the shots were over. Putin famously held a meeting with them all in the Kremlin, telling them to stay out of politics if they wished to keep control of the assets so many of them had acquired by illegitimate means.

It was a warning Khodorkovsky seemed to ignore. He was determined not to pay the increasing burden of tax falling on Russia's huge oil and minerals companies, and set out to buy off opposition MPs in the Duma, and even making overt statements about running for the presidency himself one day.

To many in Russia, this was the moment he had gone too far, and the move that condemned him to his fate.

Khodorkovsky was arrested in October 2003 on fraud and tax evasion charges in what Kremlin critics say marked a turning point in Vladimir Putin's presidency by giving hardliners the upper hand.

In 2005, Khodorkovsky was sentenced to nine years in a medium security prison, which was later reduced to eight years.

In February 2007, new charges of embezzlement and money laundering were brought against both Khodorkovsky and Lebedev just months before they were to become eligible for parole.

Khodorkovsky ridiculed the charges of stealing 350 million metric tons of oil worth $30 billion from a company that he controlled.

In May 2010, former primer minister and current opposition leader Kasyanov said the new charges against Khodorkovsky were ludicrous and politically motivated.

He said that Putin, while president, had been angered by Khodorkovsky's financial support for the Communist Party, liberal Yabloko and the Union of Right Forces.

Leading figures in Russia including Vladimir Putin have consistently denied any political motivation behind their convictions.

The court also ruled that Yukos had signed fake agreements with its subsidiaries Yuganskneftegaz, Samaraneftegaz and Tomskneft on the purchase of oil and buying oil products from them at prices that were half or a quarter of the average.

The court said it dropped some of the charges against the former Yukos head and his business partner because the statute of limitations had expired, but did not provide details.

Khodorkovsky and Lebedev's defense earlier said prosecutors could press a third set of charges against the ex-Yukos executives in the near future.

When asked about the Khodorkovsky case during his question-and-answer session on December 16, Russian Prime Minister Vladimir Putin said: "I think that a thief belongs in jail."