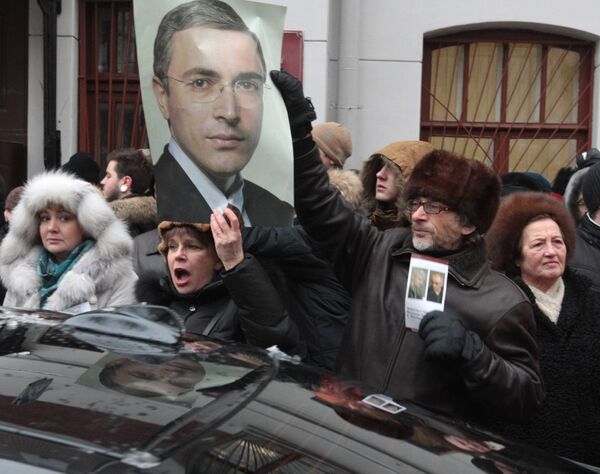 Former oil tycoon Mikhail Khodorkovsky and his business partner Platon Lebedev were declared guilty at the culmination of their second new trial in Moscow's Khamovniki court on Monday.

Former oil tycoon Mikhail Khodorkovsky and his business partner Platon Lebedev were declared guilty at the culmination of their second new trial in Moscow's Khamovniki court on Monday.

The two men, who have already spent seven years behind bars for tax evasion in a related trial, face up to seven more years in prison for embezzlement and money laundering, though a sentence has not yet been handed down.

"The court has established that Khodorkovsky and Lebedev have appropriated property using their staff positions," judge Victor Danilkin said.

"Khodorkovsky, Lebedev and [other] members of the criminal group used the embezzled money according to their own will, mostly for their own enrichment; some money was being invested in operational oil extraction and refining companies in order to... create further possible embezzlement," he said.

The court also ruled that Yukos had signed fake agreements with its subsidiaries Yuganskneftegas, Samaraneftegas and Tomskneft on the purchase of oil and buying oil products from them at prices that were half or a quarter of the average.

"The agreements on the purchase and sale of oil were fake because they included false information that Yukos was the purchaser of the oil. Meanwhile, Khodorkovsky, Lebedev and their accomplices were aware that Yukos was not the genuine oil purchaser and that [oil] products were supplied by the oil production companies directly to Russian and foreign consumers," the judge said.

The court said it dropped some of the charges against the former Yukos head and his business partner because the statute of limitations had expired, but did not provide details.

Prosecutors have accused Khodorkovsky and Lebedev of embezzling 218 million tons of oil from Yukos and laundering over 3 billion rubles ($97.5 million) in revenues.

Khodorkovsky and Lebedev's current prison terms for tax evasion were due to expire in 2011. Both defendants have repeatedly maintained their innocence and claimed that the charges against them were part of a political vendetta for Khodorkovsky's support for opposition parties.

The Khamovniki court called off a live broadcast of the verdict announcement for the press, preventing over 100 journalists from covering the event.

Khodorkovsky and Lebedev's defense earlier said prosecutors could press a third set of charges against the ex-Yukos executives in the near future.

When asked about the Khodorkovsky case during his question-and-answer session on December 16, Russian Prime Minister Vladimir Putin said: "I think that a thief should be in jail."

The verdict announcement was originally due to begin on December 15, but the court suddenly postponed it until December 27 without any explanation.