Russians rally in downtown Moscow to root out race hate 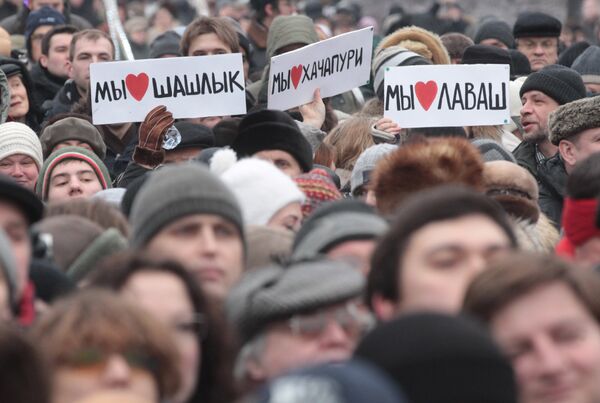 Several hundred Russians staged a Moscow for Everyone rally on Pushkin Square on Sunday in an effort to bring nationwide attention to race hate violence.

Several hundred Russians staged a Moscow for Everyone rally on Pushkin Square on Sunday in an effort to bring nationwide attention to race hate violence.

"People who came here do not intend to put up with the events that occurred in Moscow on December 11 and 15. I believe the riots in Moscow were caused by pus that burst out," one of the event's organizers Viktor Shenderovich said.

Up to 1,500 participants are expected to come at the rally. Police have set up metal detectors on Pushkin Square to check for those carrying knifes or other weapons.

The Russian capital saw its biggest public disturbances for almost a decade when a 5,000-strong crowd of nationalists and football hooligans clashed with police at central Manezh Square on December 11.

The clash was followed on December 15 by further disturbances as ethnic Russians and internal migrants gathered for a confrontation near a major train terminus in Moscow. Race hate riots also occurred in St. Petersburg and other Russian cities.

Russian President Dmitry Medvedev ordered police to identify and punish the participants of the riots. Over 1,300 people were arrested in Moscow alone and hundreds of weapons were seized.