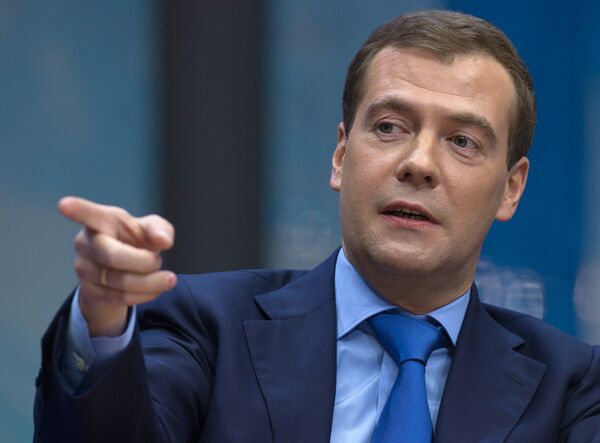 Medvedev answered questions posed by Konstantin Ernst, the head of the First TV channel, as well as Oleg Dobrodeyev of media holding company VGTRK, and Vladimir Kulistikov, the head of NTV channel.

During the interview, Medvedev took the role of the interviewer and asked the hosts of the TV channels to comment on the widespread allegations towards state media that they "filter information."

They said freedom is more about philosophy than politics and censorship.

"Freedom is inside us," Kulistikov said, adding that "today there is one of the highest levels of freedom during the entire history of our television."

In late November, one of Russia's most acclaimed journalists, Leonid Parfyonov, publicly blasted federal TV channels for their servile attitude and penchant for propaganda. His speech then set the media abuzz and even prompted talk of a new perestroika.

"I am afraid that Medvedev's call...is late today, since TV workers have psychologically become estranged from acute issues," the president of the International Academy of Television and Radio, Anatoly Lysenko, said, adding that "today's Internet is a genuine territory of freedom."

A renowned TV journalist, Svetlana Sorokina, hesitated to say if Mevedev's words would have any real effect. "Even though this was said in the presence of the management of the main television channels, I don't know how adequately they understood this, or they just nodded their heads and forgot about it."