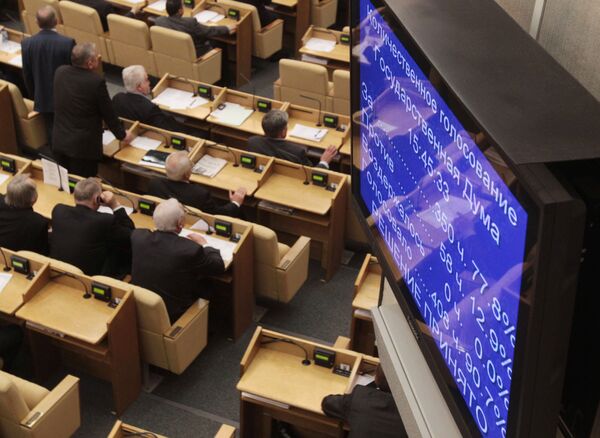 The lower house of the Russian parliament, the State Duma, has approved the first reading of three for the ratification bill of the new Russian-U.S. arms reduction treaty.

The lower house of the Russian parliament, the State Duma, has approved the first reading of three for the ratification bill of the new Russian-U.S. arms reduction treaty.

The bill received 350 votes with 58 deputies against it.

The U.S. Senate passed the new START treaty by a 71-26 vote on Wednesday in what is seen as a major foreign policy victory for U.S. President Barack Obama, who is eager to "reset" relations with Russia.

Russian parliament pledged to give its approval to the pact on Friday, but finally delayed the ratification of the New START treaty until January saying that it will have three readings before the final ratification.

"Russia's security will be ensured under any conditions," Russian Foreign Minister Sergei Lavrov said during debates in State Duma, adding that the new pact ensures, but not violates Russia's security.

The Foreign Minister said Russia had received the text of the resolution from the U.S. Senate. When asked to assess the resolution, Lavrov said it was "an onerous interpretation" with attempts "to put Russia as an offender."

Moscow has always adhered to its obligations, the foreign minister said.

The new treaty, which has won the backing of the world's top figures, including NATO Secretary General Anders Fogh Rasmussen and UN Secretary General Ban Ki-moon, trims the Russian and U.S. nuclear arsenals to a maximum of 1,550 nuclear warheads, down from the current ceiling of 2,200.