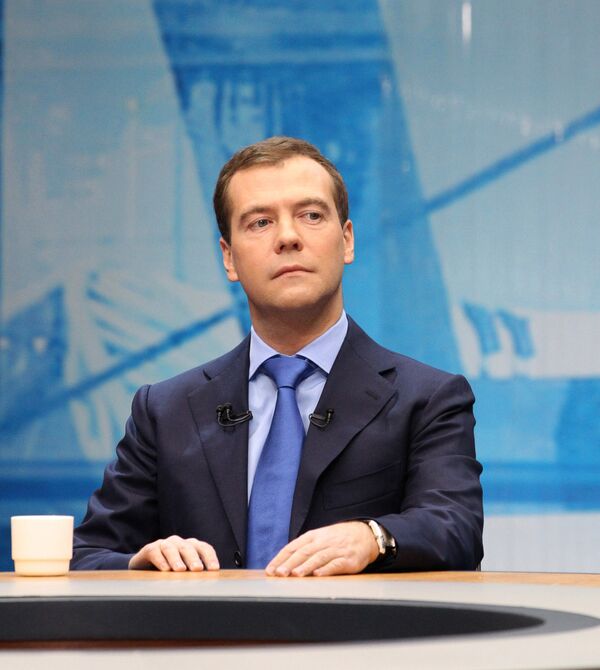 Overcoming the economic crisis, the summer's wildfires, the New START agreement, the 65th anniversary of World War II and a new focus on children's problems were the most important issues in 2010 for Russia, President Dmitry Medvedev said on Friday.

Overcoming the economic crisis, the summer's wildfires, the New START strategic arms agreement, the 65th anniversary of World War II and a new focus on children's problems were the most important issues in 2010 for Russia, President Dmitry Medvedev said on Friday.

The president told three interviewers during a live broadcast on Russia's three main TV channels that he had specifically chosen the progress made on children's issues, stressing that taking issue with the deteriorating demographic situation was essential.

"We need to have the correct attitude to children. Without this we have no future," Medvedev said, noting that the process had started but much remained to be done.

He also  included the signing of the new Russian-U.S. arms control treaty and the 65th anniversary of Soviet victory in the Great Patriotic War in his list, and touted Russia's success in emerging from the economic crisis.

"We are coming out at about four percent of GDP. That's not just standard growth for us, but includes elements of our economic modernization and therefore the modernization of life," Medvedev said.

Referring to Russia's deadly wildfires which scorched the central part of the country this summer, killing dozens of people and leaving thousands homeless, Medvedev said it had been a very difficult situation "both physiologically and physically."

"It affected our economy greatly...resulting in food shortages," he said, adding that people's losses made the situation truly catastrophic.

Medvedev went on to praise U.S. President Barack Obama for pressing on with strategic arms limitation talks with Russia and said he had a good working relationship with the U.S. leader. Obama scored a major political victory in getting New START ratified this week. Russian lawmakers look set to wait until next year to bring the treaty into force.