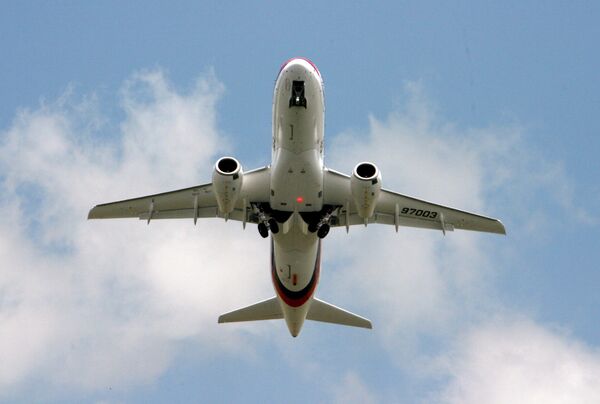 The emergency evacuation and interrupted takeoff tests were carried out at an airfield in Zhukovsky, near Moscow, under the supervision of the Interstate Aviation Committee Aviation Register (AR IAC) and the European Aviation Safety Agency (EASA).

The first test required 98 volunteers of different age groups and five crew members to evacuate the plane in 90 seconds during an emergency landing. They made it in 73 seconds.

The interrupted takeoff test probed the wheels, tires and brakes at maximum possible braking speed. In full compliance with the certification requirements the test was performed without a thrust reverser.

The aircraft loaded to its maximum takeoff weight (45,880 kg) performed emergency braking at a speed of over 300km/h and came to a stop after running 700 meters, within the required parameters.

The results of the tests showed full compliance of the plane with the EASA and AR IAC certification requirements, the company said.

The Superjet 100 project is a family of medium-range passenger aircraft developed by the Sukhoi Design Bureau in cooperation with major U.S. and European aviation corporations, including Boeing, Snecma, Thales, Messier Dowty, Liebherr Aerospace, and Honeywell.

The aircraft is capable of carrying 75-95 passengers a distance of up to 4,500 kilometers.

Sukhoi has received at least 122 firm orders for Superjet 100 airliners so far.

A Sukhoi plant in Komsomolsk-on-Amur in Russia's Far East will finish building three Superjet 100s by the end of 2010 and 14 aircraft in 2011.