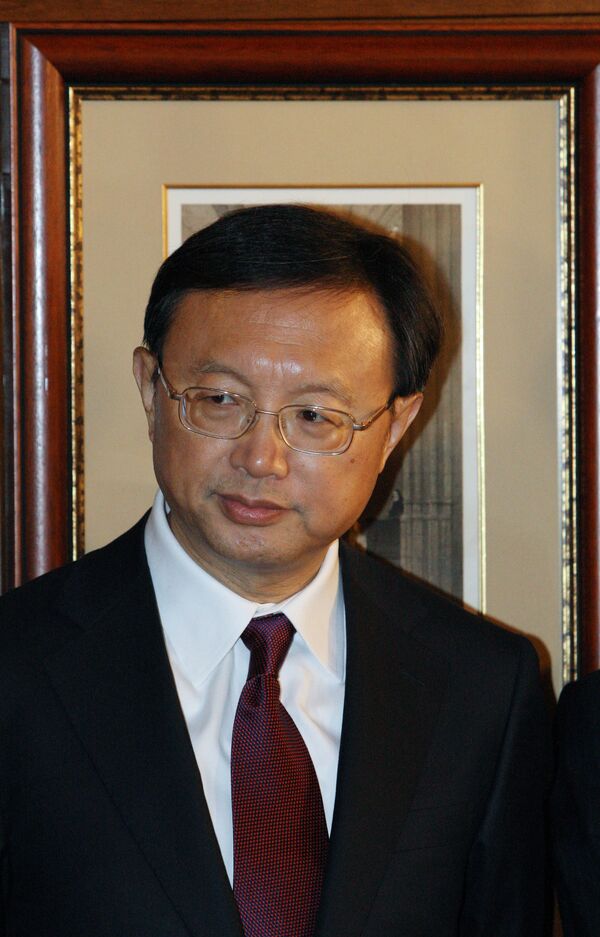 Russian Foreign Minister Sergei Lavrov and his Chinese counterpart Yang Jiechi synchronized their position on the Korean crisis and urged the parties to show restraint and solve all controversial issues by peaceful means, China's Foreign Ministry reported on Sunday.

Russian Foreign Minister Sergei Lavrov and his Chinese counterpart Yang Jiechi synchronized their position on the Korean crisis and urged the parties to show restraint and solve all controversial issues by peaceful means, China's Foreign Ministry reported on Sunday.

The Russian and Chinese foreign ministers held a telephone conversation on Saturday night to discuss ways to abate tensions between North and South Koreas and avoid yet another armed conflict.

"China stands for dialogue and consultations between the parties to resolve their differences and disputes by peaceful means. China is willing to work with Russia to continue to maintain close interaction and coordination, the ability to avoid deterioration of the situation out of control, and effectively protect peace and stability on the peninsula and in Northeast Asia," the Chinese Foreign Ministry said in a statement.

Yang said the current situation on the peninsula was very tense and could deteriorate even further, adding that China firmly opposed any attempt to create tension and insisted that both Koreas should exercise restraint and calm and carry out dialogue, the statement said.

In turn, Lavrov said Russia was deeply concerned over developments in the peninsula and was ready to take joint active efforts with China to ease tensions on the peninsula, the statement said.

Pyongyang earlier blasted Seoul's plans to hold exercises on Yeonpyeong Island on December 18-21, saying its response would be "deadlier" than the shelling in November that killed four South Koreans on the island.

On November 23, North Korea shelled Yeonpyeong, a front-line island at the maritime border between the countries, in response to South Korea's drills in the Yellow Sea. Pyongyang does not recognize the so-called Northern Limit Line drawn up by the United States at the end of the 1950s Korean War and claims that shells fired during the South's drills violated its territory.

The U.N. Security Council will hold an emergency meeting on Sunday at Russia's request to discuss the escalation of tensions on the Korean peninsula.

Russia's envoy to the U.N. Vitaly Churkin reiterated on Sunday that Russia was seriously concerned over further escalation between the two Koreas because the current situation in the region "directly affects the national security interests of the Russian Federation."

"We believe that the Security Council must send a restraining signal to the Republic of Korea [South Korea] and DPRK [North Korea], and help launch diplomatic activity with a view to resolving all issues of dispute between the two Korean sides by political and diplomatic means," Churkin said.