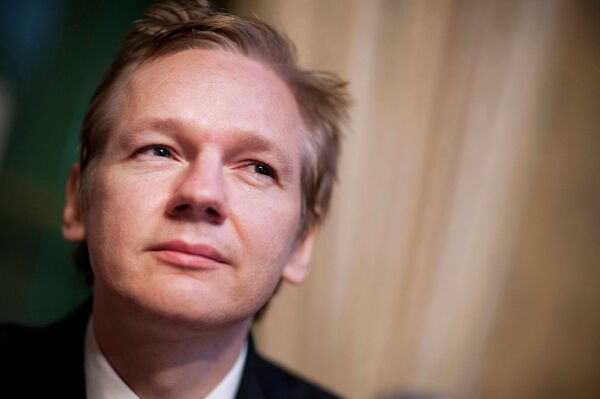 © RIA Novosti
Subscribe
Humor has been the only thing missing from the hearings on the extradition of Julian Assange in London courts.

Humor has been the only thing missing from the hearings on the extradition of Julian Assange in London courts. Until now, that is. The defense lawyers representing the founder of the WikiLeaks website are in good spirits. They are feeling confident that he will soon be released on bail, that his extradition to Sweden is far from a done deal, and that he will not be handed over to the United States.

The head of Assange's defense team, UK-based Australian lawyer Jeffrey Robertson, assured a court in London that his client is not a flight risk. He argued that "darkness descends rather early" in the part where Assange would be staying after his release from Wandsworth Prison, making it next to impossible for someone unfamiliar with the surroundings to escape under the cover of the night.

The lawyer protested that Assange is being held in inhumane conditions in his Dickensian jail, arguing that serving time in a place where the tabloid, The Daily Express, is the only paper available is like serving time in hell.

Speaking on behalf of Swedish authorities, Gemma Lindfield said Stockholm would file an appeal against releasing Assange on bail within 48 hours, as prescribed by law. Which means that the fate of this "Internet freedom fighter" will be decided on the morning of December 17.

Assange may remain in detention beyond that date, though. It's not that he lacks the money to post bail. He has already come up with the required 200,000 pounds, and his two guarantors are ready to provide 20,000 pounds each. But their checks need to be cashed before they can be accepted. This transaction will take at least three days, so there's no chance that bail will be paid by December 17, when the Swedish appeal is due to be filed. So Robertson announced a fundraising campaign instead. And there is little doubt he will succeed, because quite a few Brits, including a Nobel Prize winner and other celebrities, have shown their willingness to support Assange financially. Assange's anti-Americanism is, perhaps, what appeals to them most.

If released on bail, Assange would stay at Vaughan Smith's Ellingham Hall estate, in Suffolk. Captain Smith's name may not mean much outside the UK, but he is a quite high-profile figure at home. A former army officer, he has gained nation-wide renown as an investigative journalist and a thrill seeker. A self-professed libertarian right-winger, he never takes the trouble to explain just how he manages to reconcile his conflicting political affiliations. But then again eccentricity is a hallmark of the British character.

Mr Smith comes from an aristocratic family, whose male members all served in the Grenadier Guard. His 600-acre estate, complete with a ten-bedroom mansion, has been in the family for the last 225 years.

Assange's future accommodations also suit the police. The nearest police department is just a mile away. Under the bail terms, he will have to wear a tracking bracelet, comply with a 10pm-to-10am curfew, and check in with the police every night. And his passport is to be withheld by authorities.

We may see the bail issue resolved one of these days, but it will be some time yet before court hearings on Assange's extradition get underway. The first session has been set for January 11, with the Swedish side expected to submit all relevant documents by that date.

British experts argue that Assange's release could have been secured a long time ago and that he is still in custody either because of his defense lawyers' incompetence or behind-the-scenes political intrigues. Or maybe both.

Members of Britain's legal community claim that the defense team assembled to represent Assange in court is an unfortunate choice. Indeed, both Robertson and Mark Stephens specialize in information law, the media and human rights; extradition is not among their areas of expertise.

Many British observers are surprised that Assange wasn't released from detention immediately after the first court session. They wonder why bail was set so high, especially given that the rape charges brought against the whistleblower in Sweden look unfounded in the UK, where no one has ever been charged with rape for having intercourse with a sleeping partner.

Under British law, the country may refuse to extradite a suspect if the offense that he or she is charged with abroad is not qualified as a crime under domestic law. In Sweden, "non-consensual" sex with a woman who has blacked out under the influence of alcohol or drugs is punishable by up to 6 years in prison.

The Swedes may now wish they hadn't started the Assange ball rolling, as they wouldn't then have to deal with the isolationist British mentality. The case against the WikiLeaks founder has stirred anti-Scandinavian sentiment across British society, and even local feminists have questioned the fairness of the allegations.

The high-profile organization Women Against Rape, for one, has denounced the charges as fishy. Spokeswoman Katrin Axelsson has said that in the UK, charges like those brought against Assange are too minor to deny him bail and that Sweden's handling of his case undermines the feminist cause. She has also urged the Swedes to do some soul-searching.

According to Ms Axelsson, Sweden does not have a good track record for bringing suspected rapists to justice.

"Many women in both Sweden and Britain will wonder at the unusual zeal with which Julian Assange is being pursued for rape allegations," she was quoted as saying. "There is a long tradition of the use of rape and sexual assault for political agendas that has nothing to do with women's safety."

It's not clear whether Britain will extradite Assange. Local observers hold that it is highly unlikely that Britain will hand him over, as he has not even been formally indicted in Sweden. At this point, he is wanted for questioning.

Yet, neither Robertson nor Stephens is ruling out the possibility that their client will be extradited to Sweden and/or the United States. Robertson says that, as far as he knows, the Americans have already drawn up an indictment accusing Assange of violating the Espionage Act of 1917, and may charge him with cyber terrorism.

Among other things, this will deprive Assange of his sympathizers' financial support, as such aid would fall under the umbrella of "financing terrorism."

In the Internet community, meanwhile, many see Assange as a larger-than-life figure and have even suggested nominating him for a Nobel Peace Prize, on the grounds that his timely leaks have helped avert many global disasters.

In its year-end issue, the Italian edition of Rolling Stones magazine named Assange the Rock Star of 2010 for his efforts to promote freedom of expression, a principle at the heart of rock music.