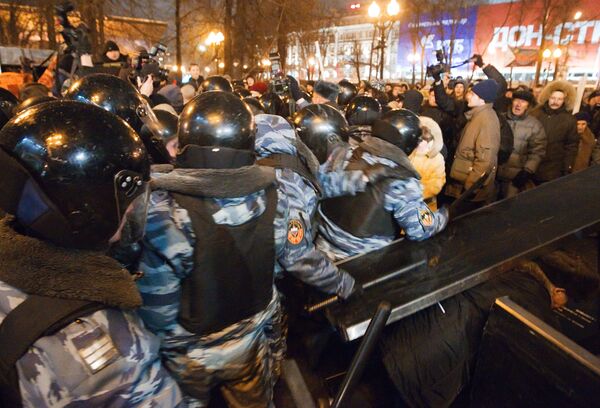 One opposition leader and several other activists have been detained after holding a rally to protest against constitutional abuses in central Moscow.

One opposition leader and several other activists have been detained after holding a rally to protest against constitutional abuses in central Moscow.

Hundreds of people gathered for an authorized rally on Moscow's Pushkinskaya Square on Sunday as Russia celebrated Constitution Day.

The leader of the socialist Left Front movement, Sergei Udaltsov, was detained after calling on activists to nail their demands on the doors of the Moscow City Hall nearby.

"We just wanted to present our demands to mayor [Sergei] Sobyanin... but all our attempts to leave the sanctioned rally on Pushkinskaya Square were blocked by police," Udaltsov told RIA Novosti.

In a separate development, a group of football fans circled around down town on Sunday chanting nationalist slogans, a day after Spartak Moscow fans clashed with police on Manezh Square near the Kremlin following the shooting dead of fellow supporter Yegor Sviridov. Sviridov, 28, was allegedly killed in a fight with a group of men from the North Caucasus earlier this week.

President Dmitry Medvedev said the police action against the protesters was lawful.