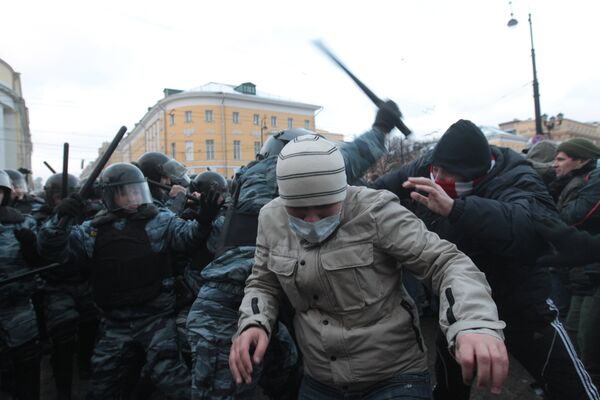 Three people from Russia’s North Caucasus region were seriously injured after being attacked by football hooligans in an area around Moscow’s Red Square on Saturday afternoon.

Three people from Russia’s North Caucasus region were seriously injured after being attacked by football hooligans in an area around Moscow’s Red Square on Saturday afternoon.

Riot police are now attempting to clear the area of an estimated 1,000 hooligans and nationalists protesting the death of a Spartak Moscow supporter.

Yegor Sviridov, 28, was killed earlier this week during a mass brawl between football fans and internal migrants from the North Caucasus in north Moscow. Police have already detained a man suspected of shooting him four times with a gun firing rubber bullets.

Participants in the unsanctioned protest gathered on central Moscow’s Manezh Square earlier in the day and ignored police demands to disperse. Police with shields then began driving them away from the area.

Reports say a large number of the crowd are entering the city’s metro system, but that sporadic fights are continuing to break out.

A rally and march passed without serious incident earlier in the day in the Russian capital. There were however reports of serious fighting between fans and riot police in St Petersburg.

Earlier in the week, some 1,000 fans blocked a busy road in the north-west of the capital and fought running battles with police.

Russia was recently awarded the 2018 World Cup, and while the event is still over seven years away, Saturday’s developments will cause concern over security for traveling supporters.