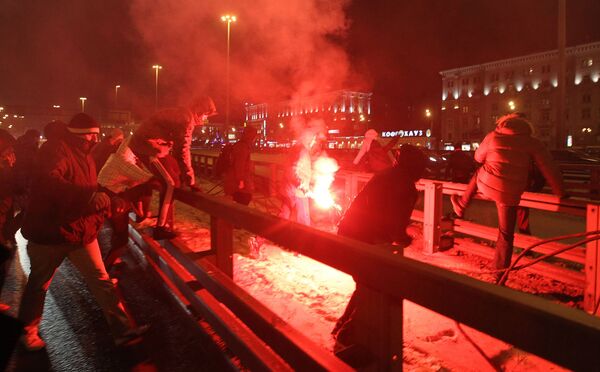 Reports say some 2,000 fans gathered in the centre of the city and clashes broke out after police prevented them from marching. Lumps of ice were thrown at police officers and a road was blocked. There have been a number of arrests.

Nationalists and members of the outlawed National Bolshevik Party were reported to be taking part in the clashes, although media say most of the participants are “ordinary fans.”

A police spokesperson denied however that any serious incidents had taken place.

A similar rally in Moscow attended by around 3,000 people has so far passed off without incident, despite police concerns that nationalist groups could hijack the event.

The rallies were in memory of a well-known Spartak Moscow supporter, and member of an organized hooligan group, who was killed during a recent mass brawl in the north of the capital between football fans and internal migrants from Russia’s North Caucasus.

Yegor Sviridov, 28, was killed by four shots from a rubber-bullet pistol. Police have already detained a suspect from the North Caucasus republic of Kabardino-Balkaria.

Around 1,000 Spartak fans blocked a busy road in north Moscow earlier in the week to protest Sviridov’s death.

Russia was recently awarded the 2018 World Cup, and while the event is still over seven years away, Saturday’s developments will cause concern over security for traveling fans.