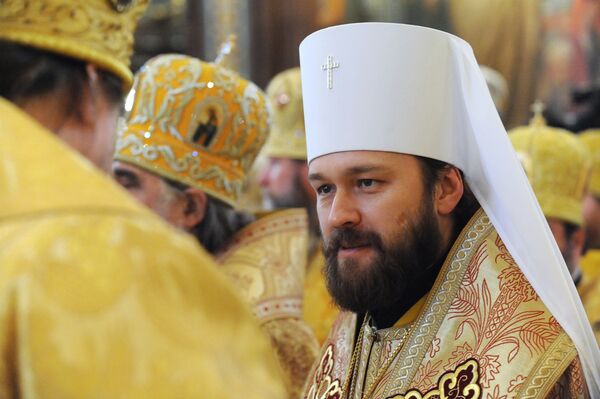 The Russian Orthodox Church is making a strong effort to assert its influence over Russian society and politics, documents released by the WikiLeaks website reveal.

The Russian Orthodox Church is making a strong effort to assert its influence over Russian society and politics, documents released by the WikiLeaks website reveal.

A classified cable sent by U.S. Ambassador to Russia John Beyrle to Washington contains comments on his meeting with Archbishop Hilarion, head of the Moscow Patriarchate Department for External Relations in January 2010.

"In a January 28 conversation with the [U.S.] Ambassador, Archbishop Hilarion freely admitted that the Russian Orthodox Church (ROC) has been extending its reach further into all areas of society," the document posted by the Russian Reporter magazine says.

"Hilarion essentially equated authoritarianism with stability, noting that Russians have always liked having a strong and powerful figure at the top," the document says.

"Calling the ROC "a significant actor" in the life of the country, Hilarion said that Patriarch Kirill is "not only symbolic," but can also influence major currents in Russia, including its political development."

The influence of the Orthodox Church has been on the rise since the collapse of the Soviet Union, despite the fact that the Russian Constitution separates the church from the state.

The ROC also appears to be "first among equals" in the context of the new program to teach religion in schools in 19 regions of the country.

Russian Reporter is a partner of the WikiLeaks website in Russia.