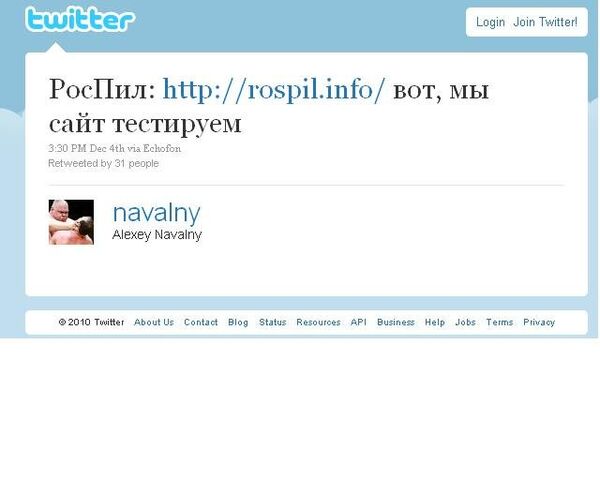 The site, which is currently only operating in testing mode at rospil.info, allows users to publish any information they have detailing corrupt practices in Russia, and discuss the material online.

The site is modeled on the WikiLeaks website, which hit the headlines last week after if began releasing more than 250,000 confidential U.S. diplomatic cables.

Experts said the Russian whistleblowing website may prove to be a good resource for tackling corruption, especially since Navalny is already a popular public figure.

Navalny, who is a minority shareholder in a number of large Russian companies, has made consistent calls for greater transparency in Russian business practices.

He caused a stir in November when he accused the former management of Russian pipeline company Transneft of embezzling at least $4 billion during the construction of the East Siberia-Pacific Ocean (ESPO) pipeline.

The Berlin-based non-governmental anti-corruption organization Transparency International has persistently rated Russia one of the most corrupt nations in the world. In the 2009 Corruption Perception Index, Russia was ranked 146th of 180, below countries like Togo, Pakistan and Libya.