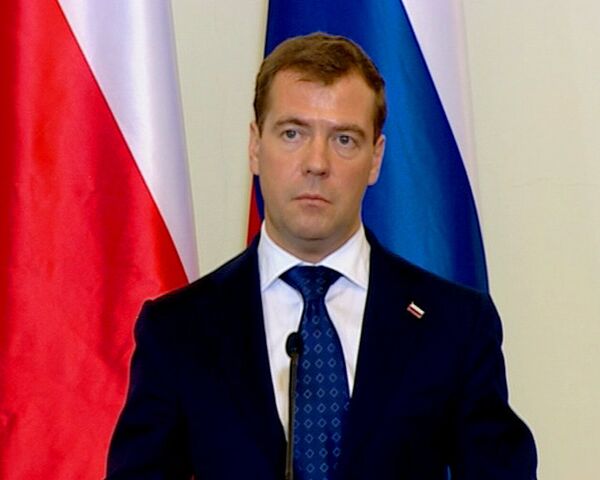 Russian and Poland are ready to breach discussion of the most difficult aspects of their shared history, President Dmitry Medvedev said during his visit to Warsaw on Monday.

Russian and Poland are ready to breach discussion of the most difficult aspects of their shared history, President Dmitry Medvedev said during his visit to Warsaw on Monday.

Russia and Poland have begun to listen to each other and we are ready "to discuss the most challenging and difficult aspects" of our shared history, the president said, adding that the spirit of their relations had changed.

"Society has raised the signal for the states to be friends, for people to listen to each other, to remember their history, but also to look into the future instead of remaining under the influence of stereotypes," Medvedev said.

Medvedev and his Polish counterpart Bronislaw Komorowski signed a number of agreements in Warsaw on Monday, including a declaration of cooperation in economic modernization.

The two sides agreed to cooperate in the research and development of innovative and environmentally-friendly technologies and recognized that Russia's accession to the World Trade Organization (WTO) will promote cooperation between Russia and the EU.

Medvedev called his visit to Poland a "significant milestone in the history of Russian-Polish relations" and said Russia and Poland should strive to overcome the most complicated aspects of their bilateral relations.

Ties between Russia and Poland, which were hampered for decades over a range of historical disputes, have been slowly improving since the two sides were drawn together in grief after the April 10 plane crash in western Russia that killed Polish President Lech Kaczynski.