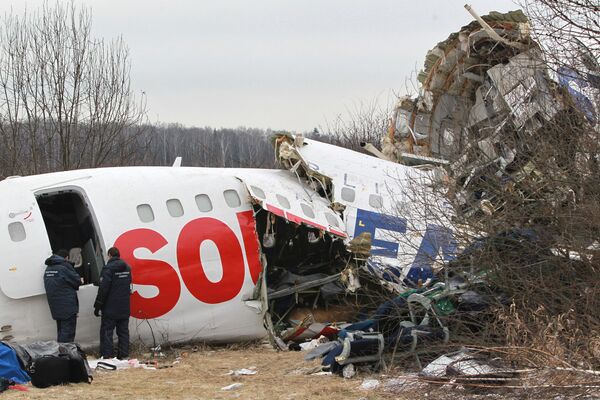 On December 4, 2010 a Tupolev Tu-154 airliner belonging to Dagestan Airlines made an emergency landing at Moscow's Domodedovo airport.

On December 4, 2010 a Tupolev Tu-154 airliner belonging to Dagestan Airlines made an emergency landing at Moscow's Domodedovo airport. After taking off from nearby Vnukovo airport, the airplane's three engines, generators and navigation systems all suddenly shut down. The plane overshot the runway and crashed into airport facilities. The impact broke the airplane into several pieces, killing two passengers and injuring dozens more. This accident raises two recurring questions in Russian history: "Who's to blame?" and "What's to be done?"

At first glance, it is tempting to blame the accident on the airplane's advanced age. Mass production of the Tupolev Tu-154 began in the late 1960s. Clearly, it is far from the world's most advanced aircraft. However, the Tu-154M in question was manufactured in 1992. It is not a "veteran" according to Russian and even international aviation standards, and the airplane was overhauled just last year.

But the facts are undeniable - the airplane crashed, people died. Thankfully, the skilled flight crew was able to land the airplane with three engines down and avert a disaster.

It remains unclear why all three engines of the plane failed simultaneously. Speculations so far include poor quality fuel, technical defects or improper pre-flight preparation. Any of these could be the cause, either individually or in combination.

The accident raises familiar questions about the safety of commercial flights in Russia, especially among the smaller regional airlines. Incidents involving a variety of airplanes, both Russian and foreign, are growing more frequent, and not all of them have endings as happy as the Alrosa Tu-154 airliner, which was successfully landed at an abandoned airport in Izhma in September 2010.

There is a consensus among experts that the growing number of accidents is rooted in the negligent use of airplanes as part of commercial plans to maximize profits. Test pilot and Hero of Russia Magomed Tolboyev cited this reason in his recent interview with the radio station Russian News Service.

"Airplanes are not given new engines or new equipment as a way to save money... If an airplane is at the end of its lifespan, it should be retired. But this is not what happens. It's all backwards. Airplanes are used to the max, until they pay for themselves dozens of times over," Tolboyev said.

What's to be done?

Finding a solution is not nearly as easy as identifying the problem. Spending to ensure flight safety and airplane maintenance will have to be increased significantly. Only major airlines such as Aeroflot can afford to do this. There are numerous smaller regional airlines using obsolete planes, both Russian and foreign. These airlines cannot afford to properly maintain these planes, thus putting their passengers at serious risk.

The situation is unlikely to improve in the foreseeable future given the aging airplane fleet and money-saving maintenance policies. Planes will continue to crash or, at best, make emergency landings.

Most likely, safety will improve only if the government gets involved. Using its administrative and economic leverage, the government should work to restore the airplane fleet and to ensure proper maintenance.

Government involvement is also needed in the form of loans and other incentives that will encourage Russian companies to start purchasing new Russian-made planes.

Order must be restored in the commercial aviation business in Russia. There are currently dozens of small airlines, with fleets between 1 and 15 planes, which do not provide quality services. There has been talk of mergers among small airlines for a long time now. The time has come to stop talking and get down to business.