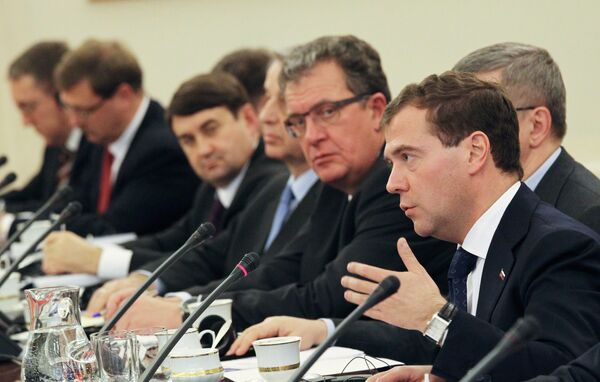 Russian President Dmitry Medvedev and his Polish counterpart Bronislaw Komorowski signed in Warsaw on Monday a declaration of cooperation in economic modernization.

Russian President Dmitry Medvedev and his Polish counterpart Bronislaw Komorowski signed in Warsaw on Monday a declaration of cooperation in economic modernization.

The two sides agreed to cooperate in the research and development of innovative and environmentally-friendly technologies and recognized that Russia's accession to the World Trade Organization (WTO) will promote cooperation between Russia and the EU.

The two leaders signed five other agreements, including a treaty on the fight against pollution in the Baltic Sea and another to encourage cooperation between the Russian and Polish prosecutor's offices.

Medvedev called his visit to Poland a "significant milestone in the history of Russian-Polish relations" and said Russia and Poland should strive to overcome the most complicated aspects in their bilateral relations.

"Unfortunately, our relations have degraded, but there is a real opportunity to give them a new impetus and open a new page in relations," Medvedev said.

Ties between Russia and Poland, which had been hampered for decades over a range of historical disputes, have improved since the two sides were drawn together in grief after the April 10 plane crash in western Russia that killed Polish President Lech Kaczynski.