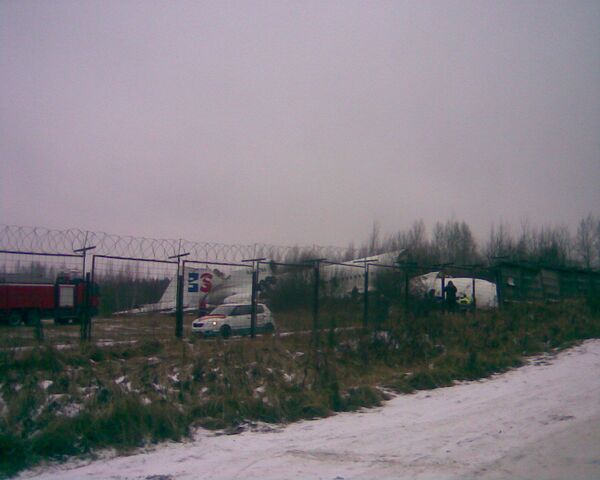 Two people were killed, over 80 were injured when Russia's Tupolev-154 plane of Dagestan Airlines made a rough emergency landing at Moscow's Domodedovo airport on Saturday with all three engines failed.

Two people were killed, over 80 were injured when Russia's Tupolev-154 plane of Dagestan Airlines made a rough emergency landing at Moscow's Domodedovo airport on Saturday with all three engines failed.

The aircraft departed for the Russia's North Caucasus city of Makhachkala from Moscow's Vnukovo airport at 2.07 pm Moscow Time (11.07 GMT).

Several minutes after the take-off all three engines of the plane had failed and the jet made an emergency landing having broken into three pieces at Domodedovo International air hub.

According to the transport Prosecutor's Office, the jet was carrying 163 passengers, including seven children and nine crew members among the others.

The jet was of the same model that crashed in April in Poland, killing Polish President Lech Kaczynski and over 90 high-profile country's officials.

The source in the Russian Federal Air Transport Agency, Rosaviatsia, said that several minutes after the take-off the plane's first engine failed.

While the pilots started an emergency landing, the second engine died. Finally, when the jet was near to touch the runway in the Domodedovo airport, the third engine conked out, the plane skidded off the runway and then bumped into the ground buildings.

Along with the engines, Tu-154 also had its power sources and navigation equipment failed, Rosaviatsia said.

Domodedovo's technical service said the short circuit in the plane's wiring could have been the cause of the simultaneous engines and navigation's breakdown.

The deputy chief engineer in the Tupolev construction bureau, Lev Dubrovin said one of the main reasons of the crash could have been an exhaustion of the plane that was created in 1992.

However, Abdullah Angutayev of Dagestan Airlines said the air carrier's fleet is in the good condition and the troubled plane was totally overhauled in 2009.

Russian Investigative Committee was quick to react by launching a criminal probe into the accident.

"A criminal case on article 263 part 3 [violation of the traffic safety rules and operating air transport] has been started," the spokesman for the Investigative Committee, Vladimir Markin said.

Russia's Chief Prosecutor, Yury Chaika has taken the special control of the investigation.

President Dmitry Medvedev has been notified over the ongoing investigation into the crash, Kremlin press service said.

Dagestan President's spokesperson said that the special commission into the accident has been established in Moscow.

Dagestan's head Magomedsalam Magomedov, whose brother, Gadzhimurad, was on board the troubled plane, had taken the situation under his personal supervision.

The passenger, Nariman Dzhamautdinov, who suffered leg injuries in the accident, said there had been no panic among the people.

"It [plane] started shaking, but from the very beginning they [flight attendants] said it was turbulence...after half an hour we were told to fasten the seat belts while the plane was nose-diving and turning in attempt to land the runway. It was seen how the jet's wing was touching the tips of the trees. Then I realized we were definitely near to fall," Nariman Dzhamautdinov said.

He said they had struggled very rough landing, "if the plane had moved another 15 meters ahead, we would have bumped into the fence and the passengers sitting in the front seats would have taken the strongest blow."