What's next for the Russian Air Force? 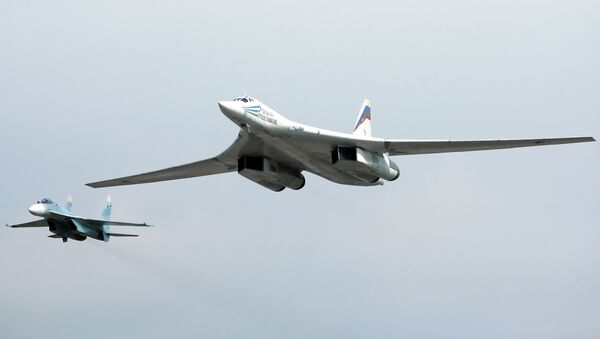 © Sputnik / Anton Denisov
/
Go to the photo bank
Subscribe
Deputy Commander of the Russian Air Force Igor Sadofiyev said on December 1 that in the next ten years, Russia will acquire more than 1,500 new aircraft and upgrade more than 400 others.

Deputy Commander of the Russian Air Force Igor Sadofiyev said on December 1 that in the next ten years, Russia will acquire more than 1,500 new aircraft and upgrade more than 400 others. The media has mentioned these figures more than once when quoting high-ranking military officers, but now the Air Force is ready to disclose the full range of its purchases.

The modernization of obsolescent planes at a relatively modest cost makes it possible to sharply increase the combat potential of the previous generation of aircraft. Such improvements are common practice in many national militaries, and, for its part, Russia primarily plans to upgrade its long-range aviation and cargo fleet.

The Air Force will extend the service life of the Tu-160 (Blackjack) and Tu-95 (Backgin) strategic bombers and the Tu-22M3 long-range bombers and upgrade its IL-78 (Midas) refueling tankers. Additional improvements will be made to the A-50 "flying radar" and cargo aircraft, such as the An-124 Ruslan (Condor) and Il-76 (Candid) airlifters.

Front-line aviation will also undergo modernization, but the accent will be shifted. All things considered, the Air Force will likely discontinue the modernization of the Su-27 (Flanker) fighter into its SM version after it receives 12 new aircraft of this type in 2011. In addition, next year the Air Force will begin flying the Su-35S fighter - the latest derivative of the Su-27.

On the other hand, the Air Force plans to step up the modernization of the Su-25 (Frogfoot) assault plane, the Su-24 (Fencer) bomber, and the MIG-31 (Foxhound) interceptor. On par with transports and far-range bombers, they will form the backbone of Russia's upgraded air fleet.

The planned purchase of 1,500 new aircraft and helicopters in the next ten years has sent some shockwaves, because in the past, annual purchases were limited to 30-40 aircraft in total. Many wonder if the plan is realistic.

Ruslav Pukhov, director of the Centre for Analysis of Strategies and Technology (CAST) and one of the leading domestic military experts, explains: "Most likely, this number - 1,500 aircraft - includes not only planes and helicopters, but also drones. Many countries count their aircraft in this way, for instance, when they present information to the UN Register of Conventional Arms.

In reality, the figure of "more than 1,500 aircraft" is most likely to include 350-400 new combat aircraft, about 100 military transports of different types, and 120-140 Yak-130 Mitten trainer aircraft. The remaining 800-900 aircraft will be helicopters and drones.

This year the Defense Ministry plans to sign a contract for the delivery of 26 MIG-29K (Fulcrum) fighters by 2015. It is also expected to sign additional contracts for the purchase of at least 80 Su-34 (Fullback) fighter-bombers and 24-48 Su-35 (Flanker- E) fighters. All in all, these purchases will amount to about 240-260 aircraft.

Contracts for the purchase of another 100-110 aircraft are likely to be awarded to the Sukhoi design bureau for the T-50 fifth generation fighter and other Sukhoi aircraft.

The Defense Ministry also has plans to buy a long list of helicopters - primarily the Mi-28H (Havoc) and Ka-52 Hokum B attack choppers. By 2020, their numbers are likely to swell to 200-250 and 50-60, respectively, while different Mi-8 (Hip) versions will remain the backbone of the transport and combat fleet. Their serial production was launched in the 1960s and will continue for at least two more decades. The fleet of light helicopters previously represented by the Mi-2 (Hoplite) will be renovated - and the Mi-2 will be replaced with the light Ansat trainer and the multi-purpose Ka-60 Kasatka (Orca).

Unknown drones and the bottom line

The biggest enigma is the drones that the Air Force is planning to buy. In fact, today the military are expected to purchase drones that have not yet been developed or are, at most, in the last stage of design. It has been previously reported that the testing of domestic drones is scheduled to start in 2011. The new year will begin very soon, and hopefully we'll hear more about them in the next 12 months.

As to the Air Force's overall number of aircraft, I can only repeat the previous estimate  given by RIA Novosti. But by 2020, Russia will have about 800 efficient combat aircraft and a total fleet numbering between 1,500 and 1,700 planes and helicopters. Including Navy aircraft, Russian military aviation will possess around 1,800-1,900 aircraft, not counting drones.