Russia wins 2018 World Cup bid, but this is not enough 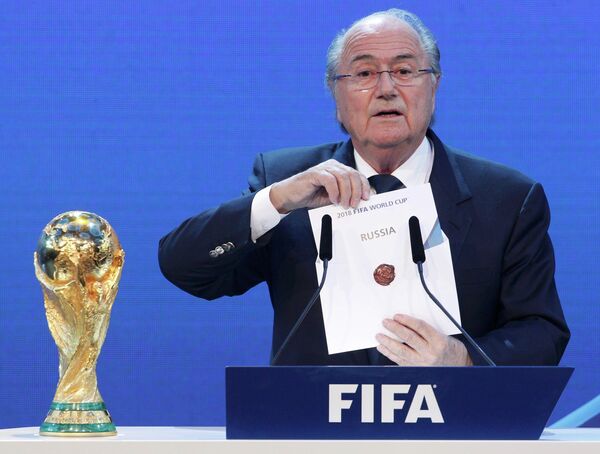 © RIA Novosti
Subscribe
Football teams usually take a day or two off to celebrate a victory, and then resume training to prove it was not just a lucky chance and that they can do even better. Being named the host of the 2018 World Cup games is like winning an important match.

Football teams usually take a day or two off to celebrate a victory, and then resume training to prove it was not just a lucky chance and that they can do even better. Being named the host of the 2018 World Cup games is like winning an important match.

Russia can spend a few days celebrating, giving emotional interviews and telling moving stories about the voting procedure in the FIFA Executive Committee, but then it must get down to business. Thirteen of the FIFA's 22 officials who have voted for Russia believe that it can do it, provided it works around the clock to prepare its football fields for the championship.

In fact, Russia's bid has won precisely because it has no fields suiting FIFA requirements. Even Luzhniki and Lokomotiv, the country's best stadiums, will have to be overhauled, while Russia's leading football clubs - Spartak, Dynamo and CSKA - don't have fields of their own.

Russia will have to improve its highway and rail networks and to build and modernize airports and hotels of different classes to offer comfortable accommodation for visitors. Russia has won in Zurich because, according to the FIFA philosophy, football development implies the creation of the requisite infrastructure. This is also why Qatar has won the 2022 World Cup bid.

Prime Minister Vladimir Putin wisely decided not to go to Zurich before the voting so as not to embarrass the FIFA Executive Committee and to rule out even a hint of pressure. He went there after the decision had been announced. He held a news conference and met with FIFA President Sepp Blatter.

One of Russia's advantages was the government's guarantee to allocate enough funds to organize the event properly, to ensure visa-free travel for the ticketed fans and their free and unimpeded movement from city to city by rail and bus.

Another reason for Russia's victory was the unheard-of aggressiveness of the British press against FIFA, and in particular some members of its Executive Committee. It fact, it is being said that the British media "killed" the bid.

The U.K. and Russia were the main rivals for the right to host the 2018 World Cup, but Britain lost it to Russia in the opening round with only two votes, one definitely from a British member of the Executive Committee and the other most likely from Franz Beckenbauer, a legendary German football coach, manager, and former player, who never made a secret of his preference.

The FIFA decision disappointed the British delegation so profoundly that they have not even congratulated the winner, as is customary in the football world. The reason became obvious a bit later: British officials think that Russia does not deserve it.

U.S. President Barack Obama expressed a similar view with regard to FIFA's decision to grant the 2022 bid to Qatar instead of the United States.

To be fair, the British presentation was certainly no worse than the Russian one. The 22 members of the FIFA Executive Council, who possibly only browsed through the multivolume bid books, most likely made their choice before they saw the presentations. They decided to give Russia a chance and it would be completely unwise not to use it.

Hosting a world cup is a brilliant opportunity to improve the sports infrastructure and build new facilities, as well as to train coaches in new methods. In a word, it amounts to focusing the government's attention on the deplorable situation of football in Russia.

Much will depend on the speed set by the organizing committee, soon to be established. Unlike the Olympic Games, the World Football Cup is held in several cities. The Russian bid mentioned 13 cities, including Saransk, whose team never played in the Premier League. The FIFA requirements stipulate that the world cup stadiums must seat 40,000 viewers. However, they are likely to idle in Russia after the World Cup is over, as attendance here can be as low as 12,000 at Premier League matches, not to mention first and second division games.

Moreover, hosting the World Football Cup is a very expensive business. Experts have calculated that it may cost Russia $10 billion to $30 billion, and the costs are bound to grow as preparations proceed, like it always happens in such cases.

In Russia, control over spending must be extremely tight to ensure that allocations are not squandered. Presidential aide Arkady Dvorkovich, although jubilant about the FIFA decision, has written in his microblog that this time we really must try to do without kickbacks.

It will be first time Russia has held the World Cup. According to FIFA rules, Britain will now be unable to submit a bid to host the World Cup again until 2030.