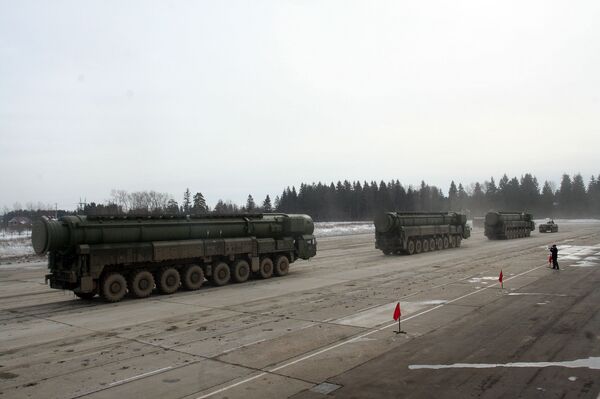 © Photo : Strategic Missile Forces
Subscribe
International
India
Africa
President Dmitry Medvedev caused a media sensation on November 30, 2010, when he used his third state of the nation address to comment on the Strategic Missile Forces, aerospace defense and Russia's attitude to the planned deployment of the U.S. ballistic missile shield in Europe. This offers an overview of what Russia's strategic forces and space defense will look like ten years from now.

President Dmitry Medvedev caused a media sensation on November 30, 2010, when he used his third state of the nation address to comment on the Strategic Missile Forces, aerospace defense and Russia's attitude to the planned deployment of the U.S. ballistic missile shield in Europe. This offers an overview of what Russia's strategic forces and space defense will look like ten years from now.

The president said that the failure to reach any agreement on missile defense risked provoking a new spiral of the arms race.

"I'd like to speak plainly about the choice we face in the next ten years: either we reach an agreement on missile defense and create a meaningful joint mechanism for cooperation, or, if we fail to do so, a new spiral of the arms race will begin, and we will have to make decisions on the deployment of new strike weapons," Medvedev said.

It is not the first time that this possibility and Russia's potential reaction have been discussed. The Obama administration has greatly modified George Bush's plans for a U.S. ballistic missile shield in Europe, which will be no longer designed to intercept intercontinental ballistic missiles.

But presidents come and go, while technology grows ever more sophisticated - or deadly. Obama's decision could still be reviewed by his successor.

If that were to happen, Russia would have two options.

It could deploy tactical missiles in its western regions which would be targeted on the U.S. ballistic missile shield in Eastern Europe. Russia has everything it needs to play out this scenario, including the Iskander-M systems (SS-26 Stone) equipped with two solid-propellant single-stage guided missiles of "quasi-ballistic" capability. These missiles have a range of 400 km (250 miles) and can reportedly carry conventional and nuclear warheads: enough to form a robust counterweight to the U.S. missile shield.

Russia's other option would be to withdraw from the START-3 treaty, a course of action stipulated in a special statement made during the treaty's signing last spring. Incidentally, the treaty has not yet been ratified. This course of action, however, would be prohibitively expensive, as it would involve a quantitative growth in strategic nuclear forces in addition to a new round of the nuclear arms race.

All things considered, any form of new confrontation would be counterproductive for both sides.

Medvedev's call to create in Russia a unified strategic command combining its air, missile and space defenses was no less news-worthy.

"Next year we must combine the existing air defense and missile defense networks, early warning systems and aerospace monitoring systems under a unified strategic command." This will form the basis of Russia's strategic defense, he continued. It will protect Moscow, the Central Industrial Region and the Supreme Command.

To be complemented, later, with new-generation air defense systems capable of intercepting ballistic missiles, the unified strategic command will protect selected regions, including the Strategic Missile Forces' launch sites, from both air and space attacks.

This rearming of the Strategic Missile Force will continue throughout the next decade. Soviet-made missiles, which are becoming obsolete, will be replaced with the RS-24 Yars, a MIRVed version of the Topol-M missile capable of carrying four warheads. The production of single-warhead Topol-M missiles will be discontinued.

Russia currently has about 70 silo-based and mobile Topol-M missile systems.

Within a decade this Strategic Missile Forces should boast up to 100 Yars systems. Alongside the remaining Topols, they will be able to carry about 500 nuclear warheads.

The other charges permitted under the new START treaty, which cuts the total to 1,550 for each side, will be carried by naval forces (about 1,000) and the Russian air force's long-range aviation (approximately 100).