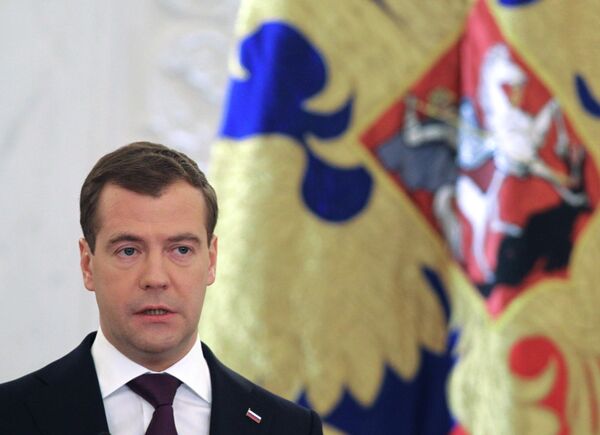 © RIA Novosti . Ilya Pitalev
/
Go to the photo bank
Subscribe
"I'd like to speak plainly about the choice we face in the next ten years: either we reach an agreement on missile defense and create a meaningful joint mechanism for cooperation, or if we fail to do so, a new round of the arms race will begin, and we will have to make decisions on the deployment of new strike weapons," President Dmitry Medvedev said in his annual address to the Federal Assembly.

"I'd like to speak plainly about the choice we face in the next ten years: either we reach an agreement on missile defense and create a meaningful joint mechanism for cooperation, or if we fail to do so, a new round of the arms race will begin, and we will have to make decisions on the deployment of new strike weapons," President Dmitry Medvedev said in his annual address to the Federal Assembly.

If this quote were taken out of the context and backdated a couple of eras, it would have seemed routine. Every lieutenant knows this obvious truth: without effective confidence-building measures, we will have to rely on a balance of fear to maintain stability. At the very least, this fear helped us get through the latter half of the 20th century without a global nuclear war.

But now the context is different. A careful reading of what Medvedev said about foreign policy in his address reveals its central theme - the formation of a new system of international relations, which Medvedev calls a "modernization partnership."

This is not a balance of fear. It's not about whether Moscow likes a unipolar world, or whether Russia is liked in the world and by whom. It seems that the mentality underpinning Russia's foreign policy has been purged of these questions, which were vital to our interests and global policy just a short while ago.

Russia is now interested in something quite different - a "modernization partnership with Germany and France" and, slightly less important, "the huge potential for increasing the role of innovation in our cooperation" with China, India, Brazil, the South Korea, Singapore, Japan, Canada, Finland, Ukraine, Kazakhstan and other countries. As for the United States and the European Union as a whole, Medvedev sees cooperation with them as merely a "considerable reserve that will help us reach" these modernization goals.

In this context, missile defense seems like small but annoying obstacle to cooperation. It will be good if we can reach an agreement with NATO on joint missile defense - something NATO itself is pushing for. If not, we'll have to deploy these vague "new strike systems," which we will have to develop. Note that these systems are not presented as the alternative to a modernization partnership. They will be deployed but nothing more. It seems like an awful waste of money.

How is this worldview any different than idealism, or at least realistic idealism? Primarily because relations between Russia and the United States in particular, and between Russia and the West in general have long ceased to play a vital role in global politics. And while I believe strategic offensive arms are an important issue, the pending ratification of the Russian-American New START Treaty is an important, but not seminal, event in global politics. President Obama's Republican opponents claim that New START was his only foreign policy achievement - a treaty Republicans believe that both sides can do without. Maybe they are wrong, but this is an interesting sign.

So, what is the dominant mood in global politics today? The answer is clear - total uncertainty about the current world order and what it will be like tomorrow. Let's take just one example of the numerous examples out there, an article from the American magazine Foreign Policy entitled "How's That New World Order Working Out?" The ideas raised in this article are echoed in many similar publications.

The author, Parag Khanna, writes that "the rising powers are reminding us that respect for hierarchy is no longer on anyone's agenda," and that "Brazil and Turkey - two of the world's most avidly internationalist emerging powers - joined together this May to announce they had stepped in to broker a nuclear-fuel swap deal with Iran..." These countries are not even permanent members of the UN Security Council. He goes on to say that, "A little over 20 years ago, then U.S. President George H.W. Bush... proclaimed a 'new world order.' " It was supposed to be a U.S.-dominated international system, but where is it now? Khanna writes that "the G20 has hardly lived up to its billing as the new 'steering committee for the world,' " and that "the Security Council has long ceased to be legitimate or effective."

He writes: "The closest thing we have to multilateral governance happens on a regional level, and it is far more promising, whether the deeply entrenched and supranational European Union, the rejuvenated Association of Southeast Asian Nations, or the nascent African Union." Khanna believes that "with each passing year, deal-making at Davos and the Clinton Global Initiative become more important than the glacial advance of empty declarations at international summits. These and other venues are the places where the 'new new world order' is being built. And it's happening from the bottom up rather than the top down." It's still not clear what this "new new world order" will look like.

There are counterarguments to be made (this is exactly what the author wants), but on the whole, the symptoms are familiar.

To get back to missile defense, many people in Moscow wonder who this project is meant to defend us from. Is NATO sure that Iran will not only be capable but willing to launch strikes at Europe? For what purpose?

The issue of a Russian-Western missile defense alliance will be a kind of litmus test of how quickly we'll be able to overcome the inertia of past fears and mistrust. The majority of people in Russia and the West do not yet realize that the old world order is long gone. Treaties on strategic arms reductions belong to the era of George H.W. Bush, although the declarations affirming that we are no longer enemies were signed during his son's presidency. How will these Augean stables be cleaned? An interesting question. But, judging by Medvedev's latest address, Moscow truly wants to let bygones be bygones.