Family at heart of new Russia in Medvedev's address 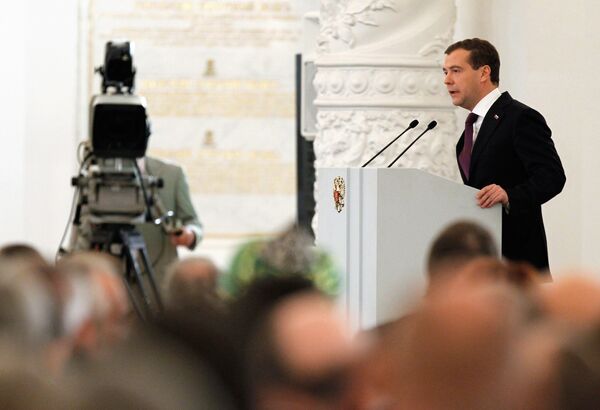 In his third annual address to the nation, Medvedev skirted around the most sensitive domestic and foreign policy issues and demonstrated that he is clearly onside with his powerful mentor and predecessor, Prime Minister Vladimir Putin, just 16 months ahead of the next Russian presidential elections.

"Caring for the future generation - this is the most reliable, intelligent and noble investment," was Medvedev's key theme in the state-of-the-nation address.
Medvedev reiterated that Russia was ready to work closely with NATO on developing new missile defense systems, but warned the two sides have a decade to do this and failure to make headway in talks could spark a new arms race.
This was as decisive as it got, however, in terms of foreign affairs. "I was struck because the speech did not focus on any of the conflicts, either external or internal," said Masha Lipman, an expert for Carnegie Moscow Center.
"I think he identified problems but what he said about foreign policy was very telling - it was all about cooperation with the West," she said.
The Russian president stayed neutral on various issues and made no mention of Afghanistan, the Middle East, North Korea or Central Asia. "He hinted at lots and lots of problems but none of the conflicts that took place over the course of the last year," said Lipman.
Tandem-watchers sat upright when Medvedev marked out Moscow Mayor Sergei Sobyanin, a Putin loyalist, as the man who will transform the capital into an "international financial center" - an unseen nod of deference to Putin who watched on blank-faced from the front row, said Alexei Mukhin, director of the Center for Political Information.
"This underlined the cooperation between the Putin and the Medvedev camps," said Mukhin.
Medvedev was also quiet on many domestic issues too. While calling on civil society to defend Russia's environment, he made no mention by name of the ongoing controversy around Khimki forest. Grass roots protests over ecological damage caused in the felling of the forest on Moscow's outskirts led Medvedev to place a moratorium on construction of a road intersecting Khimki, which Putin had thrown his weight behind.
"But there was not even a half-word about Khimki," said Lipman. "He just talked broadly about the environment. The same goes for police reform. He didn't mention any of the outrageous episodes of this year." Medvedev also chose not to reiterate Russia is facing "ruinous stagnation," allegations he made in a video blog on Wednesday which were aired on television.
Mukhin said Medvedev gave a modest but more emotional speech this year partly because of failure to implement the pledges of last year's annual address. But the "humanitarian" dimension also came from the influence of his wife, Svetlana Medvedeva. "I think a very important role in formulating the speech was played by Svetlana Medvedev who was driven by the more humanitarian side in the 'family tandem' between Medvedev and his wife, Svetlana," Mukhin said.