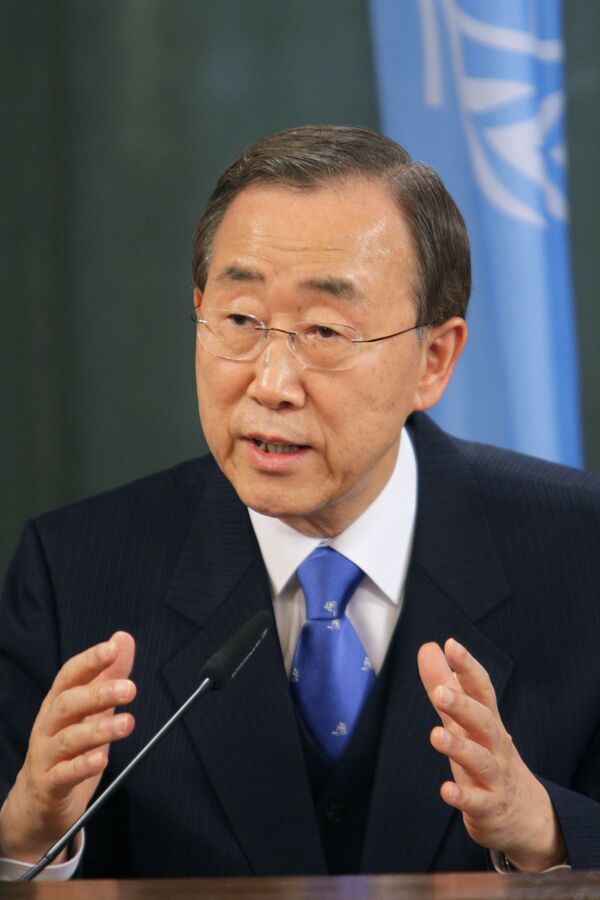 © RIA Novosti . Anton Denisov
/
Go to the photo bank
Subscribe
UN Secretary General Ban Ki-moon on Tuesday urged Russia and the U.S. to press on with ratification of the START treaty on strategic nuclear arms cuts, and a peaceful resolution of the crisis in Korea.

UN Secretary General Ban Ki-moon on Tuesday urged Russia and the U.S. to press on with ratification of the START treaty on strategic nuclear arms cuts, and a peaceful resolution of the crisis in Korea.

"I strongly recommended the US and Russian governments sign this new START treaty," he said in an exclusive interview with RIA Novosti in the Kazakhstan capital Astana, where he is due to attend an OSCE summit.

"This is a very important demonstration of their political commitment to see and to realize a world free of nuclear weapons...I sincerely hope that both countries will ratify this START treaty as soon as possible," he said.

The START treaty, limiting the strategic nuclear stockpiles of the United States and Russia, was signed by President Obama and President Medvedev in Prague in April, but must be ratified by the legislature of both nations before coming into effect.

Politicians in both countries have criticized elements of the agreement.

Ban also insisted that the current crisis on the Korean peninsula must be resolved "peacefully."

"As a Korean citizen, I am deeply concerned about the Korean peninsula," Ban said.

"All the differences of opinion should be resolved peacefully and the UN is always ready to facilitate such a process if requested by the parties concerned," he added.

"There should be no such unprovoked attacks on the Korean peninsula," he went on.

Ban, whose first term as secretary general expires in December 2011, said he was committed to continuing in his post.

"In the last four years, I have been working as secretary general to implement the three main pillars of the UN. - peace and security, development, and human rights. I have been working every day as if today is the first day of my mandate...I will continue to do that...I believe that I will get positive support from member states," he said.