The skeletons in the State Department's inbox 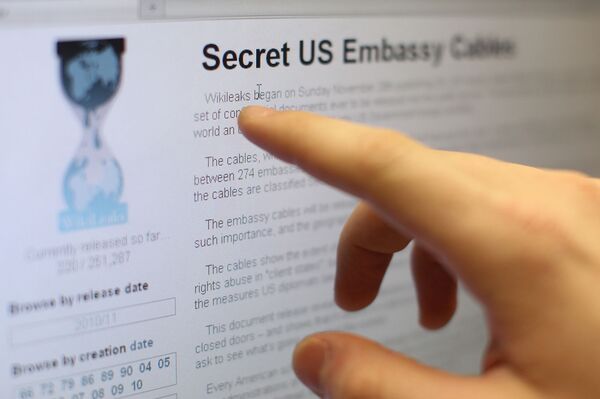 © RIA Novosti . Ilya Pitalev
Subscribe
Charles Talleyrand, Napoleon's long-serving foreign minister, was infamous for his intrigue, but he was clever enough not to commit any of his shady dealings to paper.

Charles Talleyrand, Napoleon's long-serving foreign minister, was infamous for his intrigue, but he was clever enough not to commit any of his shady dealings to paper. Instead, he tried to settle all important affairs in private conversations, either personally or through confidants. Unlike the prudent French diplomat, officials at the U.S. State Department have not taken precautions to protect themselves from embarrassment at the hands of whistle-blowers like the website WikiLeaks, which recently published hundreds of thousands of U.S. diplomatic cables.

Whistle-blowing on a mass scale

Julian Assange's WikiLeaks website, an outlet for secret government information, has been consistently expanding its scope and outreach. In July and October this year, it made public tens of thousands of classified Pentagon cables and reports, which it passed on to five major Western newspapers.

This time, WikiLeaks has released more than 250,000 confidential diplomatic cables from more than 250 U.S. embassies and consulates around the world. Exposure on that scale was unheard of before the invention of the Internet. "Paper would have been impossible to steal in these quantities," Sir Christopher Meyer, a former British ambassador to the U.S., said in response to the latest document dump from WikiLeaks.

However massive, this latest leak provides little fodder for conspiracy theorists. It reveals no thrilling details about spies or assassination plots. But it does shed some light on the U.S. State Department's actual (as opposed to stated) goals, objectives and strategies, as well as on its ethical code.

It's all Pentagon's fault

That WikiLeaks has been able to get its hands on so many U.S. diplomatic cables is obviously the result of grave negligence on the part of those responsible for ensuring the confidentiality of U.S. government communications.

The vulnerability of the U.S. government's communications network stems largely from the inadequate adjustments made to it following the September 11 terrorist attacks on the World Trade Center and the Pentagon. The failure of the U.S. intelligence community to put the pieces together and foil the terrorist plot was blamed on the lack of coordination and information sharing between the various agencies on a day-to-day basis, and the Pentagon launched its SIPRNET software system to encourage meaningful exchange.

The State Department may hold WikiLeaks responsible for violating the confidentiality of sensitive government information. However, part of the blame lies with the Pentagon, which has failed to adequately secure the internal communications network.

The real questions is, why are sensitive communications dispatched through a system accessible to more than 3 million U.S. government officials, from the top-ranked all the way down to the rank-and-file? In such a big user community, there is always be one person disillusioned or crazy enough to air the government's dirty laundry.

Behind WikiLeaks' latest release is U.S. Army private Bradley Manning. The 22-year-old has been charged with leaking classified information and is facing a court-martial. His case is a controversial one, as the line between the legal and the criminal is somewhat blurred. Is leaking secret government files to the press an expression of the freedom of speech or an offense that puts lives at risk? Is the Internet a blessing or a curse if used to stir sedition?

In this particular case, the disclosed materials contain no top-secret information, and their release is unlikely to put the lives of any diplomats, intelligence officers or soldiers in danger. Most are nothing more than embassy reports about the situation on the ground in various countries, some spiced with rather undiplomatic comments.

That said, the leak does compromise the reputation of U.S. diplomacy, calling into question the professionalism of White House officials and Washington's trustworthiness and reliability as a partner on the international stage.

The State Department's strong reaction to the leak shows that it views secrecy as a way of guarding itself against unwanted disclosures as well as a face-saving precaution.

Nothing in the newly leaked documents is sensational. It is widely known that the White House suspects Pakistan of double-dealing on the Taliban, and frowns upon Vladimir Putin's friendship with the controversial Italian premier, Silvio Berlusconi. The allegations that German Chancellor Angela Merkel tends to "avoid risk and is rarely creative" and that members of the British royal family often behave "inappropriately" aren't particularly revealing, either. Many readers would likely agree with the U.S. diplomats who labeled French President Nicolas Sarkozy as "the emperor with no clothes," Afghanistan's Hamid Karzai as a man "driven by paranoia," and North Korea's Kim Jong Il as a "flabby old chap."

What is revealing is the discrepancy between U.S. diplomats' on-the-record comments and things they say privately to their bosses and colleagues. The British newspaper The Guardian - one of the five newspapers WikiLeaks used to make the State Department's communications available to the general public - says the embassy cables show the degree of corruption and dishonesty of those in power.

The relationship between the media and the polity is never a smooth one. But in a real democracy, news outlets cannot and should not sanitize reports that might present their government in an unfavorable light. Yet, this is precisely what the State Department is now pushing for, invoking national security to make its case.

In an ideal world, everything done for the sake of democracy should be in the public interest and, therefore, open to the public. And if diplomacy - U.S. diplomacy in this case - is used as a tool to police the world, the media must bring this to the attention of audiences worldwide.