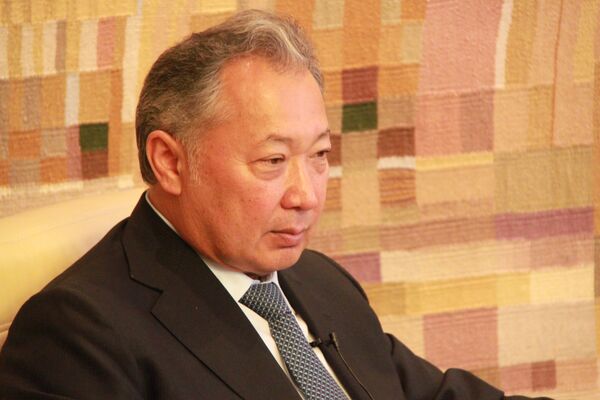 Kyrgyzstan's ex-president, Kurmanbek Bakiyev, senior officials from his establishment and commandos from the national Alfa counter-terrorism unit who are reportedly behind the mass shootings of protesters in Bishkek in April have denied the claims against them.

Kyrgyzstan's ex-president, Kurmanbek Bakiyev, senior officials from his establishment and commandos from the national Alfa counter-terrorism unit who are reportedly behind the mass shootings of protesters in Bishkek in April have denied the claims against them.

The trial on Bakiyev and his backers is currently underway in the Kyrgyz capital of Bishkek. A total of 28 people are targeted in the investigation. Six of them, including ex-president Bakiyev, his brother Dzhanybek Bakiyev, former head of the State National Security Service, and the ex-president's elder son, Marat Bakiyev, are outside the country and have been charged in absentia.

Official charges against the Kyrgyz ex-president were brought on Tuesday. According to the prosecution, Kurmanbek Bakiyev and figures of his establishment ordered the shooting of people protesting in the central square of Bishkek on April 7. A total of 77 people, two of them minors, were killed in the shootout. Trials are expected to last for at least two months.

In April, the state prosecution named the ex-president's younger brother, Dzhanybek, the direct organizer of the massacre, saying he was the man who "gave orders via portable radio" and "carried out control over the teams of snipers."

Members of the Alfa group said they did not understand the charges against them. "I have not gone into collusion with Dzhanybek Bakiyev, I haven't even seen him," one of the commandos said.

The Kyrgyz interim government first requested the former president's extradition in May, accusing him of abuse of power and corruption and of ordering the shooting of civilians during the coup d'etat. Bakiyev has denied the claims.

Bakiyev and his relatives have also been accused of instigating the June clashes between ethnic Kyrgyz and minority Uzbeks in the south of Kyrgyzstan, Bakiyev's former stronghold. The riots claimed the lives of some 300 people, according to official figures. Kyrgyz officials say the real death toll may exceed 2,000.