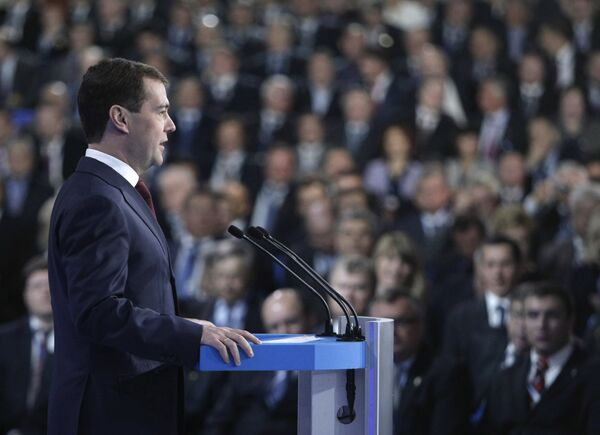 “The president’s remarks are absolutely understandable. Competition in a modern democratic society is an indispensable precondition for development. The lack of competition is a threat,” Andrei Vorobyov, head of the party’s Central Executive Committee, said.

The opposition is not an “enemy” but “a different opinion,” he said.

“The better the criticisms, the more effective the decisions made by the authorities,” Vorobyov said. “We hope that the opposition has heard this call and understands it correctly.”

The pro-Kremlin United Russia party has been the dominant political party in Russia since it was founded in December 2001. It has supported both Medvedev and former President Vladimir Putin.

The party currently holds 315 of the 450 seats in the Duma, with the other seats held by Communist, Liberal Democratic and A Just Russia parties, all of which openly support the government.

The opposition Yabloko party, which consistently garnered from 5 to 7 per cent of the vote during the 1990s, failed to win any seats in the Duma in the 2003 parliamentary elections and has been losing influence in the country ever since.

Russia will have a diversified political system in the next decade, presidential deputy chief of staff Vladislav Surkov said on Thursday.