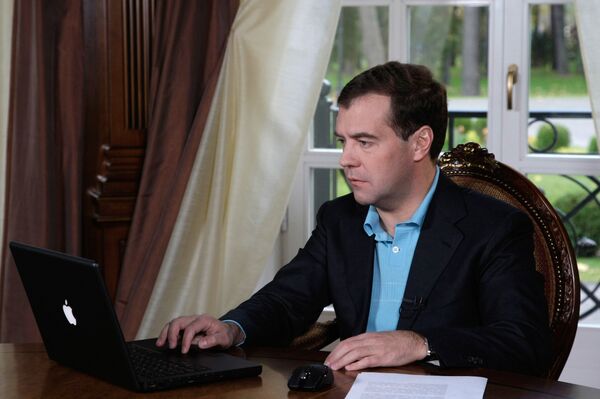 © RIA Novosti
/
Go to the photo bank
Subscribe
Russian President Dmitry Medvedev called for greater competition among political parties as a solution to the political stagnation in the country.

Russian President Dmitry Medvedev called for greater competition among political parties as a solution to the political stagnation in the country.

"It is not a secret that political life in our country at a certain point started showing signs of stagnation...This stagnation is equally deadly for the ruling party and the opposition," Medvedev said in his video blog late on Tuesday.

"There is an urgent need to raise the level of political rivalry [in Russia]," Medvedev said, adding that reforms of Russia's political system have been steadily carried out since 2008.

"We simply want to make our political system more just, more flexible, more dynamic, more open to reforms and progress," the president said. "This system must be trusted by the electorate."

Since the collapse of the Soviet Union at the end of 1991, Russia has faced serious challenges in its efforts to forge a political system to follow nearly 75 years of the Soviet rule.

With a new constitution, which was adopted in 1993, and a new parliament representing diverse parties and factions, Russia's political structure started showing signs of stabilization.

Since the formation of United Russia in December 2001, it has been the ruling political party in Russia. Initially supporting  former president Vladimir Putin, and now his successor Dmitry Medvedev, United Russia holds 315 of the 450 seats in the lower house of parliament, the State Duma.