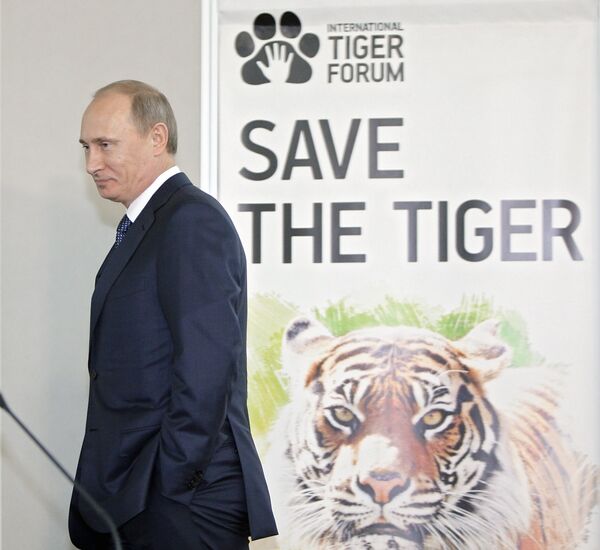 Russian Prime Minister Vladimir Putin on Tuesday called Hollywood actor Leonardo DiCaprio "a real man" for his efforts in making it to the tiger forum.

DiCaprio was on his way to Russia to attend the International Tiger Conservation Forum when his plane was forced to land in New York's JFK airport late on Sunday due to an engine flame out and malfunction.

"We need to praise the American pilots who showed bravery, calm and professionalism by turning on the fire extinguisher system and shut down all the engines, putting the plane into a free-fall for several seconds," Putin said, adding: "I don't think anyone would want to continue their trip, but Mr. DiCaprio isn't one of them."

Putin said DiCaprio began his journey on November 21 on a flight out of New York and once the plane gained altitude, one of the engines caught on fire. After the engines were restarted, the plane returned safely to New York.

However, the premier continued, DiCaprio didn't stop at that and his adventures continued.

"Because of strong winds over the ocean, the airplane used up its fuel [before arriving to its destination] and was forced to land in Helsinki," Putin said under a roar of laughter from the audience.

"That's not funny," Putin said with a smile.

The airplane was refueled in Helsinki and continued its flight to St. Petersburg.

"That's what we call a real man!" Putin said.

Earlier on Tuesday it was reported that DiCaprio had committed $1 million to World Wildlife Fund for urgent tiger conservation efforts through his Fund at the California Community Foundation.

Putin also told the audience that he was thankful to DiCaprio for his donation to the fund.

DiCaprio, who shot to fame for his role in the 1997 blockbuster Titanic, is known for his participation in tiger conservation programs. Earlier this year, he joined WWF in its effort to raise $20 million through the Save Tigers Now campaign. As a WWF board member he recently visited tiger parks in Nepal and Bhutan.

The World Wildlife Fund plans to spend $85 million in the next five years on programs aimed at restoring the global tiger population.

According to the WWF, there are about 3,200 tigers left in the wild in 13 countries worldwide.

A century ago, there were some 100,000 wild tigers across Asia and the Russian Far East. The wild cats have been steadily pushed to the verge of extinction by poaching, illegal trade, and habitat loss.