Spartak crash to Marseille defeat, out of Champions League 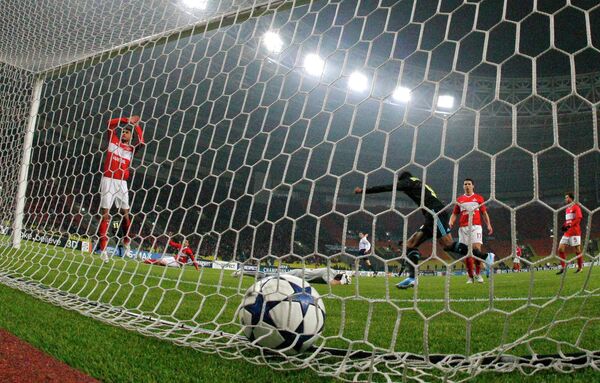 © RIA Novosti . Vitaly Belousov
/
Go to the photo bank
Subscribe
Spartak Moscow fell to a 3-0 defeat to Marseille on Tuesday evening, the defeat spelling the end of their 2010/11 Champions League campaign.

Spartak Moscow fell to a 3-0 defeat to Marseille on Tuesday evening, the defeat spelling the end of their 2010/11 Champions League campaign.

The Russian club had won their first two matches in their group, including a 1-0 victory in France against Tuesday night’s guests, but failed to pick up any points in their next two games against Chelsea.

However, a win against Marseille would have guaranteed Spartak progress to the next stage of the tournament for the first time since 2001.

It was not to be though, French international Mathieu Valbuena giving the visitors the lead in the 18th minute with a powerful shot after Spartak had failed to clear.

Marseille doubled their lead 13 minutes after the break, Loïc Rémy’s fortunate mishit giving him space to fire past Spartak keeper Andriy Dykan, his shot bouncing off both posts before coming to rest in the back of the net.

Spartak striker Welliton was then shown the red card in the 64th minute for pushing Souleymane Diawara, his departure meaning the Muscovites now had an even greater mountain to climb.

Brazilian striker Brandao rifled in number three in the 68th minute, Spartak’s defence seemingly having decided that the match was over already.

Which it soon would be, and with it Spartak’s Champions League’s hopes. Even if Marseille lose their final group game to Chelsea and Spartak beat Zilina, meaning both sides finish with 9 points, the French club will take the second qualifying spot by virtue of their better head-to-head record.