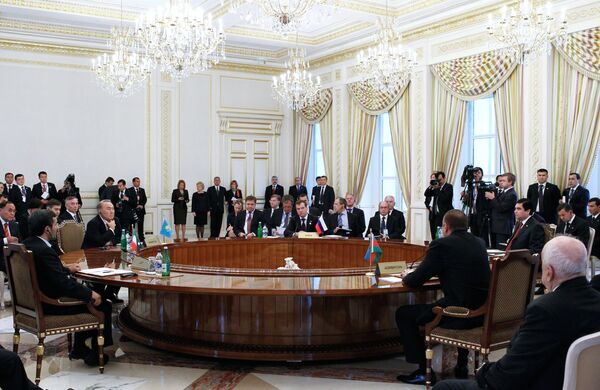 The presidents of the Caspian states of Azerbaijan, Iran, Kazakhstan, Russia and Turkmenistan agreed on Thursday to take steps to resolve the long-standing dispute over the Caspian Sea delimitation.

The presidents of the Caspian states of Azerbaijan, Iran, Kazakhstan, Russia and Turkmenistan agreed on Thursday to take steps to resolve the long-standing dispute over the Caspian Sea delimitation.

At the end of the Caspian summit, which took place in the Azerbaijani capital of Baku, the five leaders issued a joint declaration, reaffirming their intention to sign a convention establishing a new legal status for the Caspian.

Russian President Dmitry Medvedev said the talks had been "friendly" and "constructive" and called on his counterparts to sign the agreement within a year.

The presidents agreed to draw up delimitation plans to fix the width of national maritime zones to 24-25 nautical miles within the next three months, Medvedev said.

"This paves the way for a fully-fledged agreement on the status of the Caspian Sea," he added.

The Russian president invited his counterparts to convene in Russia in a year's time to "put a full stop on this very important issue."

The status of the oil- and gas-rich inland sea has been a source of disagreement between the nations that border it since the collapse of the Soviet Union.

Bilateral agreements exist between Russia, Azerbaijan and Kazakhstan to delimitate the bed of the northern part of the sea. Iran proposes dividing the sea into five equal parts, but Azerbaijan is against the initiative.

During the summit, the five presidents also signed an agreement on security cooperation.