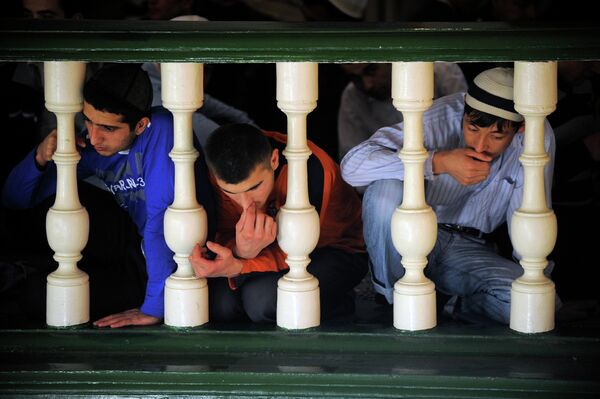 Russian Muslims are celebrating on Tuesday Eid al-Adha, the Festival of Sacrifice, which is known as Kurban Bairam by Russian and Central Asian Muslims.

Russian Muslims are celebrating on Tuesday Eid al-Adha, the Festival of Sacrifice, which is known as Kurban Bairam by Russian and Central Asian Muslims.

Thousands of believers have come to mosques across Russia to take part in religious ceremonies.

According to different estimates, there are from 8 million to 20 million Muslims in Russia, with some 2 million living in Moscow.

From 50,000 to 60,000 Muslims were expected to attend the service at the Moscow Congregational Mosque, one of four in the capital, the Russian Mufti Council spokeswoman said.

The celebrations were taking place in a calm atmosphere, Gulnur Gaziyeva said. No violations of public order have been registered.

"Traditions of good-neighborly relations between representatives of different peoples, faiths and cultures have deep roots in our country. Russia's multi-million Muslim community plays one of the most important roles in their maintenance," the president said in an official message.

Eid al-Adha comes the day after the pilgrims on Hajj, the annual pilgrimage of Muslims to Mecca in Saudi Arabia, descend from Mount Arafat.

The Festival of Sacrifice is a three-day holiday in commemoration of Prophet Ibrahim's readiness to sacrifice his first born son Ishmael on Allah's orders.

Nowadays, the holiday celebrates commitment, obedience and self-sacrifice in the name of Allah. All Islamic followers, who can afford it, should kill an animal as a symbol of Ibrahim's sacrifice, and its meat is then equally distributed among family, friends and the poor.