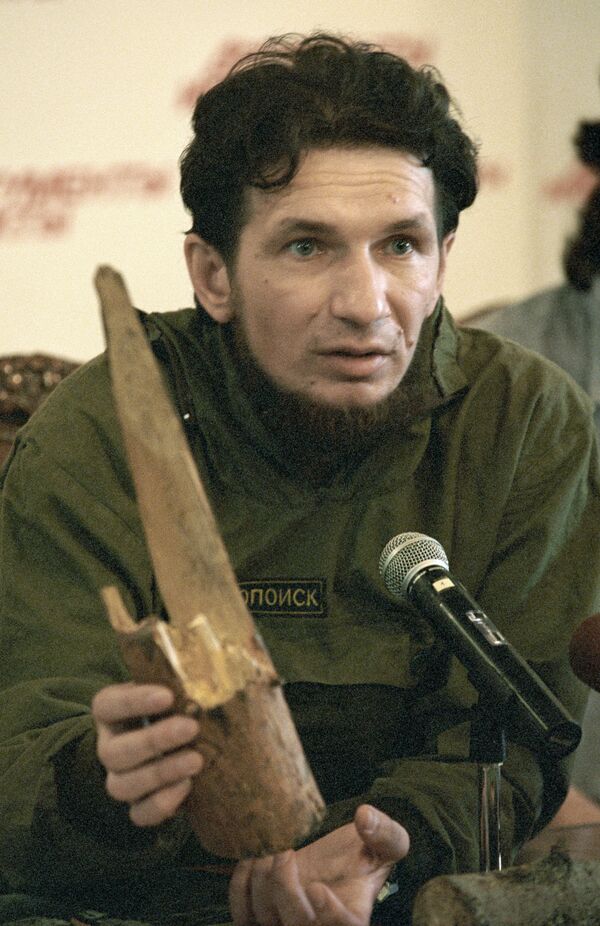 Vadim Chernobrov, head of the public organization Kosmopoisk that investigates UFOs and unexplained phenomena, tells Samir Shakhbaz about recent developments in UFO research and sheds light on some long-standing mysteries, including those surrounding the famous Area 51 military base in Nevada.

Vadim Chernobrov, head of the public organization Kosmopoisk that investigates UFOs and unexplained phenomena, tells Samir Shakhbaz about recent developments in UFO research and sheds light on some long-standing mysteries, including those surrounding the famous Area 51 military base in Nevada.

S.S.: This is a very interesting subject, but the media and the Internet are filled with so much junk that some interesting things-- for example mysterious events that deserve our attention -- go unnoticed, and real scientists and researchers are labeled fakes and quacks. What is the most exciting thing you’ve been working on this past year?

V.C.: By sifting through the archives, we have turned up enough reliable data that allows us to  anticipate events rather than just going to a site after an event already occurred. We can now forecast what will happen and where. We can go to a site before an event– before the crop circles are made or a UFO appears. The more accurate our forecasts, the closer we will get to unlocking these mysteries. However, we are competing in a serious race.

S.S.: That’s only natural. Your rivals have much more sophisticated technology.

V.C.: I’m not trying to compare technology. It’s not about technology, it’s all about who will figure it out first. Sometimes I see that we’re on the right track. We go to a site, set up our equipment and video cameras, but it turns out that the other side’s reconnaissance was better.

S.S.: Have you ever managed to catch something on camera?

V.C.: Our ultimate goal is not to get a photo or high-quality footage. This chapter has been closed for a long time. Believe me, seeing good footage or picture is nothing new. I’ve seen hundreds of examples. It would be new to find some physical evidence – something that can be measured and touched, something that can give our engineers new food for thought. I see ufology as an engineering problem with psychological and social dimensions, of course. As an aerospace engineer, I’m always most interested in the last page of the textbook, to find out what we will be flying in 50 or 100 years. In fact, ufology is an attempt to get a glimpse into the near and distant future. This is what drives us.

S.S.: Have you found any physical evidence lately? What contribution have you made to the technological advancement of the human race?

V.C.: For the nearly quarter century that we’ve been doing this work, we have found a few dozen mysterious items. We have tested most of them at laboratories and failed to clearly identify the purpose of most of them. The items that we managed to identify were very simple, for example, a piece of wire or a fitting. However, these items are a thousand years old, predating the era of advanced human technology. There are also items that we could not identify at all. We don’t even know what to call them. We are like savages holding a transistor radio, not knowing what to do with it.

S.S.: You can’t even figure out the basic function of these objects?

V.C.: That’s right. Experts are worlds apart in their views on these objects.

S.S.: Where are these objects? Are there any pictures of them? Or are they classified?

V.C.: Since 1992, we have taken the initiative to classify certain things. There isn’t a government agency or committee that supervises our work and keeps certain things under wraps. If we withhold anything, we do it deliberately, and only because research is ongoing.

S.S.: Do you believe that governments are paying enough attention to this issue? Or are they doing it in secret?

V.C.: Both. In fact, your questions are not mutually exclusive. We see it everyday. They are partly responsible for the tons of garbage in the media and on the Internet. Some of these reports are sophisticated canards meant to mislead rivals: while we are doing real work and while our specialists are engaged in reverse engineering, you will be following the false scents that we come across all the time. I’m talking about high quality fakes made by skilled forgers. I’m sometimes astonished at how much time and money is wasted on these false scents and cover-ups. This means that there is something to cover up.

S.S.: You must get this question all the time, but what about the top-secret military base in Roswell, in the United States, which allegedly holds remains of flying saucers and even an alien pilot.

V.C.: If you’d be interested, we will publish a picture of an object from Area 51, which we assume is part of a UFO. We managed to get hold of one object in a very complicated operation. We were helped by Japanese partners under the condition that we conduct a thorough analysis of the object, which they would retain exclusive rights to. In fact, this object turned out to be a masterpiece of forgery. Our Japanese colleagues were very upset, and so were we until we realized that if someone is spending so much money to make these fakes and plant them, then there has got to be something authentic to hide. As for Russia, we have looked into all the events we could here. We toured top-secret bases in the 1990s, when one could get access to almost anywhere. But we found nothing. Apparently, 99% of reports on extraterrestrials are fakes. We have to accept this. But we continue our work because at least 1% of these reports are authentic, and this is enough to keep us going. This is what we are working for.

S.S.: When could first contact occur in your opinion? Have you had personal encounters with extraterrestrials?

V.C.: No, I haven’t had any direct contact. Of course, I would like to. But the issue is not what I want.  It’s not about the aliens, it’s about us. In other words, contact will happen when we are ready for it. Look at the news stories around the world. If you look at human civilization objectively, you will see how aggressive and mindless it still is. There is no chance of contact while we are still so unsophisticated. There is certainly no chance that we will get alien technology. Sometimes we say that the fact that we have not been contacted is proof that that there is intelligent life in the universe. Only an insane alien civilization would want to contact us.