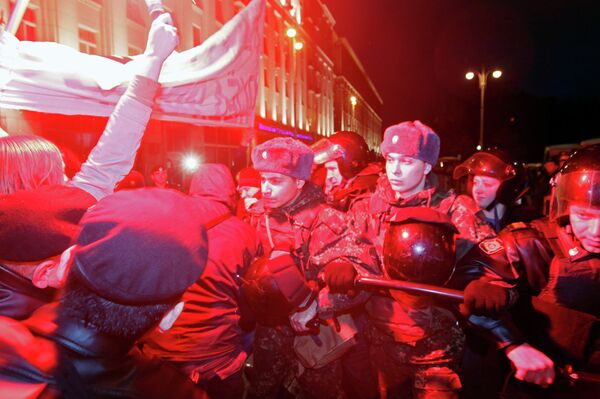 © RIA Novosti . Vitaly Belousov
/
Go to the mediabank
Subscribe
International
India
Africa
A Russian opposition activist may be sentenced to up to five years behind bars for hitting a police officer in the face with a burning flare during an unsanctioned rally in central Moscow.

A Russian opposition activist may be sentenced to up to five years behind bars for hitting a police officer in the face with a burning flare during an unsanctioned rally in central Moscow.

On Friday, the Left Front opposition movement attempted to protest against recent attacks on a journalist and an environmental activist. Unauthorized rallies in Moscow usually result in mass detentions, and the Moscow government had issued a warning for the protestors prior to the event.

"A police was injured while detaining one of the participants. One of the most active protestors hit him in the face with a burning flare," said Viktor Biryukov, a spokesman for the Moscow police department.

The officer, Yevgeny Kovalev, was taken to hospital and diagnosed with eye injury and concussion. His injuries are not life-threatening.

His attacker, who was identified as a Left Front activist, Grigory Torbeyev, was immediately detained. A criminal case was launched against him, and he faces up to five years in prison.

The incident stirred up a great media outcry, with experts calling on to make those who stage public gatherings responsible for illegal or violent consequences of the event.

"In many countries, organizers of public events may be held responsible. A person, who brings a lot of people together should bear responsibility for both their safety and behavior," said Anatoly Kucherena, a member of the Russian Public Chamber.

"I'm convinced that such blatantly provocative use of pyrotechnics during mass events in the city is inadmissible," said Svetlana Mironyuk, RIA Novosti's Editor-in-Chief and President of the Moscow Police Public Council.

"With respect to the right of various political groups to express their opinion, we are convinced that such events should pose no threat to their participants, passers-by or those who maintain order. In addition, they should not provoke police officers to resort to harsher measures," she said.

The event's organizers, Konstantin Kosyakin and Sergei Udaltsov, were detained by police during the rally. They were sentenced to 10 and 12 days in prison, respectively, for organizing an unauthorized protest.