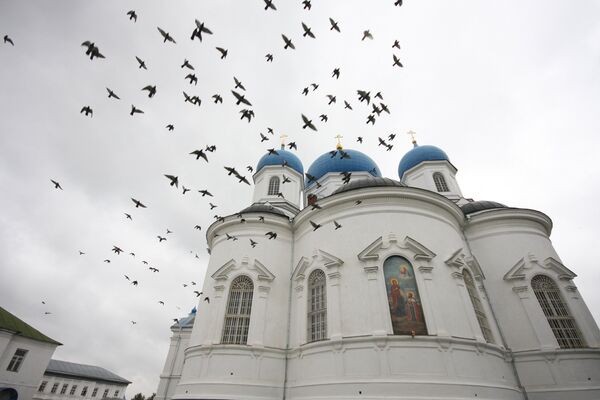 © RIA Novosti . Andrei Stenin
/
Go to the photo bank
Subscribe
The archbishop of Vladimir and Suzdal fired on Saturday the Mother Superior of St. Bogolyubsky Convent in the central Vladimir Region and other clergymen allegedly involved in a child abuse scandal.

The archbishop of Vladimir and Suzdal fired on Saturday the Mother Superior of St. Bogolyubsky Convent in the central Vladimir Region and other clergymen allegedly involved in a child abuse scandal.

Media reports earlier said the convent's nuns victimized teenagers from a local orphanage, beating them with belts, forcing them to bow innumerable times, eat spoonfuls of salt, as well as depriving them of food and sleep as "punishment." However, a human rights working group established by the Vladimir Region's governor has found no proof of these claims.

Archbishop Yevlogy ruled that no children or volunteer workers with children can reside on the convent's territory and that the boarding school will be transformed into an ordinary Orthodox school.

"The complicated situation around St. Bogolyubsky Convent was widely discussed in the church and secular circles receiving absolutely different and sometimes contradicting assessments," the archbishop said adding that measures were taken to resolve the conflict around the school and convent.

Father Innokenty, the secretary of the Vladimir and Suzdal eparchy, said the archbishop has taken the situation in the convent and the boarding school under serious control.

"We will seriously revise the internal developments in the convent and the boarding school, examine the situation and correct drawbacks if found," he said.

He added that the archbishop fired the clergy to make them feel responsibility for what was going on.

Russian Orthodox Church spokesman Vladimir Legoida said the archbishop's move will help avoid pressure on the children involved in the abuse row, and investigators of the case.

The convent was investigated a year ago after allegations of mistreatment, but no action was taken as the claims were not proven.