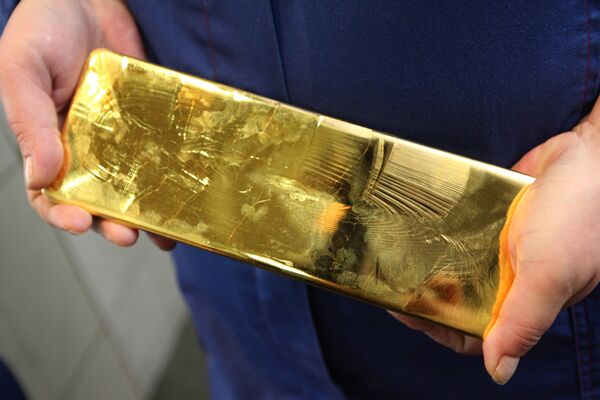 "KazakhGold Group Limited ... confirms that it is in discussions with the Asaubayev family and other parties regarding possible alternatives for the settlement of all claims and actions between KazakhGold and the Asaubayev family, which may involve a sale by KazakhGold of interests in its operating companies. No agreement has been reached with any party and there can be no assurance that any such agreement will be entered into or a transaction will be completed. Any such transaction, if agreed, would be subject to extensive conditions, including the receipt of governmental approvals," the company said in a statement.

Earlier on Friday, Vedomosti business daily quoted a source familiar with the situation as saying that Polyus Gold was in talks to sell its stake in Kazakhaltyn, the production division of KazakhGold, to the Asaubayev family, Kazakhaltyn's previous owners.

Under the deal, Polyus would preserve control over KazakhGold, free of its operating assets, but listed on the London Stock exchange, and the parties would withdraw their claims, the source said.

Polyus Gold bought 50.1 percent of KazakhGold from the Asaubayevs for $269 million in 2009. It later increased its stake to 65 percent following an additional share issue to carry out a reverse takeover, under which KazakhGold was supposed to acquire its parent company Polyus Gold.

The merged company was expected to become one the world's leading gold mining companies, whose shares will trade on the LSE.

In June, Kazakhaltyn and Jenington International Inc., controlled by Polyus, initiated a trial at the Royal Court of Justice in London against the Asaubayevs in relation with a violation of several contract terms and fund embezzlement. Kazakhstan's authorities launched in response a process aimed at terminating the reverse acquisition of Polyus Gold by KazakhGold.

Vedomosti quoted the source as saying that under the deal, the Asaubayevs were expected to compensate all Polyus Gold's expenses on buying KazakhGold shares.

The sum was to include $331 million spent on the purchase of the 65 percent stake in KazakhGold as Polyus says that Kazakhaltyn's price is equal to that of KazakhGold. The Asaubayevs are also expected to reimburse a $52 million loan provided by Polyus to Kazakhaltyn.

Polyus Gold has also guaranteed KazakhGold's $200 million bond issue and Polyus Gold and the Asaubayevs are in talks on either replacing the guarantor or buying the bonds from their holders.