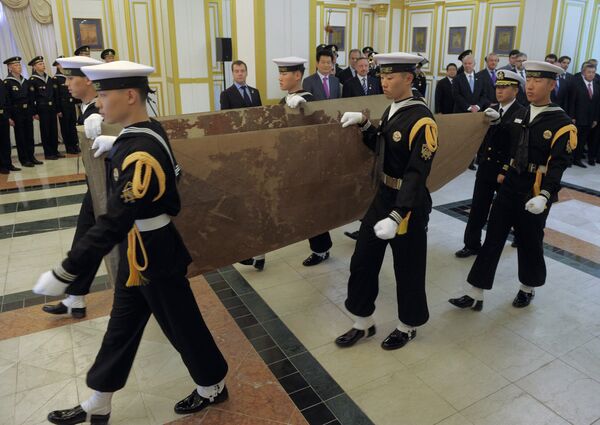 The flag of Russia's legendary Varyag cruiser, sunk in 1904 during the Russo-Japanese war, was handed over to Russian President Dmitry Medvedev in South Korea on Thursday as a token of improving relations between the two countries.

The flag of Russia's legendary Varyag cruiser, sunk in 1904 during the Russo-Japanese war, was handed over to Russian President Dmitry Medvedev in South Korea on Thursday as a token of improving relations between the two countries.

The flag, which was raised from the sea bed near South Korea in 1905 and kept in the depositary of a museum in the nearby port town of Incheon, was taken on board the Russian Varyag missile cruiser in Incheon on Thursday.

"Thanks to the will of Incheon's citizens and authorities, the flag of the historic Varyag cruiser is being transferred to temporary storage in St. Petersburg, where it will be kept in the Naval Museum," presidential aide Alexander Beglov said.

According to an agreement between Russia and Incheon, the flag will be exhibited in Russian museums for two years.

The legendary Varyag cruiser has become a symbol of Russia's unbending character and combat valor, and has inspired generations of Soviet and Russian soldiers.

The cruiser, which was built for Russia in the United States in 1899, was one of the most elegant and fastest ships of her time, with a cruising speed of almost 25 knots.

The warship, which was trapped by a Japanese squadron in the Korean port of Chemulpo in 1904, during the Russo-Japanese War, was badly damaged in battle and scuttled by the crew to prevent her from falling into enemy hands.

Raised from the seabed by the Japanese a year after her sinking, she spent the following decade sailing as a training vessel.

Russia bought the vessel back, along with other ships captured by Japan, and re-commissioned her as the nation's Arctic Fleet flagship in 1916.

In 1917, the Varyag was sent to a Glasgow shipyard for repairs, only to be impounded by Britain following the Bolshevik government's refusal to pay Imperial debts.

Britain then sold the ship to German firms for scrap in 1920, and she sank off the Scottish coast while being towed to Germany.

A Russian expedition found the wreck site in 2003, and a memorial commemorating the cruiser was unveiled near the site in 2007.