EU and Russia: An uphill road to visa-free travel 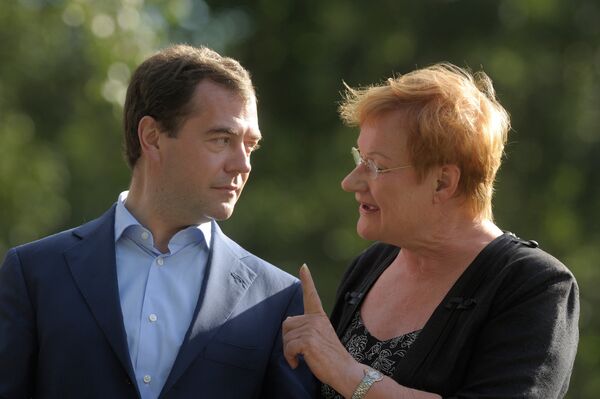 © RIA Novosti . Sergey Guneyev
/
Go to the photo bank
Subscribe
Tarja Halonen, the president of modest, wealthy and friendly Finland, has arrived on a state visit to Russia. On November 9, she held talks with her Russian counterpart Dmitry Medvedev and will now depart for Kazan, where she will remain until November 11.

Tarja Halonen, the president of modest, wealthy and friendly Finland, has arrived on a state visit to Russia. On November 9, she held talks with her Russian counterpart Dmitry Medvedev and will now depart for Kazan, where she will remain until November 11.

How unfortunate that with this president we won't be able to resolve our problems in the sauna, the place where it is the easiest to negotiate with the Finns. However, not even a good steam will relax our EU partners enough to consent to visa-free travel with Russia anytime soon.

After meeting with Medvedev, Halonen said that she "welcomes the ARRIVAL of visa-free travel." When exactly it will arrive remains unclear.

Major bilateral and international issues are always reserved for meetings between presidents. Russia and Finland are ready to expand cooperation across the board - in energy, ship-building, forestry and transportation. We are prepared to work together to clean up the suburbs of St. Petersburg and to cooperate on nanotechnology. We have taken similar positions on European and global security, a peace settlement in Afghanistan, resolving the nuclear dispute with Iran, fighting drug trafficking and cooperation with the EU. We both recognize the need for a new European security architecture. Finland has always been a testing ground for Soviet and Russian political initiatives (with the exception of the Finnish War of 1939). Based on Finland's reaction, Russia can tell what will fly in Europe, and what won't.

But despite President Halonen's support, Europe is denying Russia what all countries outside the Schengen Area want most - visa-free travel in the EU. Moscow has been relentless on this issue for the last few months but to no avail. And it is unlikely to succeed in the next three or four years, and perhaps longer.

This is by no means a disaster. Russia is willing to move forward gradually, beginning with easier visa procedures for diplomats, businessmen, students and tourists. In fact, this process is already underway. The pace of progress is not the problem, it's the fact that we are moving forward in fits and starts. It didn't have to be this way.

We wanted it as fast as possible, but it turned out as always

Russia deserves better than the polite but firm "no" it has received time after time. We find ourselves in this embarrassing position for three reasons: a) we are always impatient and fail to understand that while we want to be part of Europe, Europe does not necessarily want us; b) we underestimate how valuable the visa issue is to the EU as a tool of diplomacy - it can be wielded as both carrot and stick; and c) we have not chosen the best time for our campaign to rapidly transition to visa-free travel, without a lot of red tape.

Up until the Russia-EU summit in Rostov-on-Don last May, we stubbornly refused to accept these three reasons, nearly driving ourselves into a dead end as a result. After all, Europe had previously proposed "common steps" on liberalizing visa requirements, which would be in the interests of both sides. We were supposed to start complying with the EU's technical demands - exchanging visa information, forming databases, developing a system to ensure the security of documents, synchronizing visa requirements, the repatriation of illegal immigrants, etc. In turn, the EU was supposed to gradually lift visa restrictions.

This will be a slow process to be sure, but it's better than the Russian-EU visa "revolution" that has been opposed by former Soviet satellites in Eastern Europe. Extending the "visa quarantine" is more or less the only weapon they have left against Moscow, and they seem content to exact their petty revenge with it.

Moscow is falling behind Kiev and Chisinau

Moldova and Ukraine are about to receive what Russia is being denied. Soon both will be granted an action plan toward visa free travel. The European Commission has already made the relevant decisions. This is something like the halfway point on the road to visa-free travel. Ukraine will receive this "halfway" ticket at the upcoming EU-Ukraine summit on November 22. The plan calls for amendments to national laws on visa support, security and the rapid repatriation of illegal immigrants.

There is no concrete timeframe for the transition from the action plan to visa-free travel. But Kiev is hoping that it will be granted by 2012, when Ukraine and Poland will host the UEFA European Football Championship. Ukraine has agreed to comply with all provisions of the EU's "technical document" on visa-free travel. Incidentally, the requirements imposed on Ukraine are much more stringent than the requirements on Russia, which we thought would slow down the process too much.

Brussels admits that no action plan is being drafted for the EU-Russia summit scheduled to take place in Brussels in December, and nobody knows when one will be drafted. Ukraine and Moldova are not the most advanced post-Soviet democracies, and officials in Brussels do not even conceal that this "visa acceleration" is meant to draw these countries closer to Europe. The EU has been concerned about Viktor Yanukovich's pro-Russian views since he took office. And now that right-wing forces in Moldova have split, Brussels is worried about a potential communist comeback there.

There is hope yet for Russia. Judging by the statements coming from Brussels, it is not too late for Russia to comply with European demands (which we will have to do eventually if we want to travel to Europe without visas). At the summit in Deauville, France on October 18-19, attended by Nicolas Sarkozy, Angela Merkel, and Dmitry Medvedev, the Russian president allegedly accepted the requirements contained in the EU's technical document on visa-free travel. It turns out that Russia will receive its visa-free status piecemeal.