Russian law on protests must not suppress political activity - Medvedev 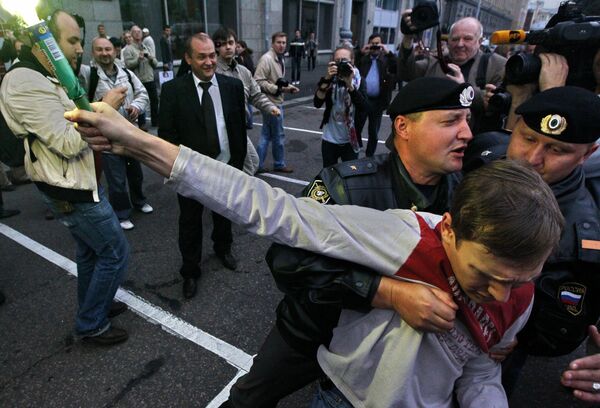 New legislation on protests must not suppress the civil or political activity of Russians, President Dmitry Medvedev said on Monday.

New legislation on protests must not suppress the civil or political activity of Russians, President Dmitry Medvedev said on Monday.

Last week, Medvedev imposed a veto on amendments to a law that stipulated tougher sanctions for those violating public meeting regulations set by the government.

"On the one hand, decisions concerning the constitutional rights of our citizens should be well-balanced. These decisions should benefit public order... But, on the other hand, legal norms must not suppress political activity," Medvedev said at a meeting with Rossiiskaya Gazeta journalists.

He said that finding a balance in issues concerning constitutional rights was "the most difficult" task.

"The president's task is to ensure a balance between a certain degree of freedom and a certain degree of security. In my opinion the [previous] version [of the bill] had some positive aspects, but it somehow shifted that balance," the Russian leader said.

The adoption of the amendments by the Russian parliament triggered an angry reaction from the Russian opposition, which has claimed the new bill would further restrict the freedom of assembly in Russia.

Medvedev earlier said the amendments ran against the constitution, which guarantees the freedom of assembly. He agreed, however, that the law on rallies should be improved and ordered further work on the bill.