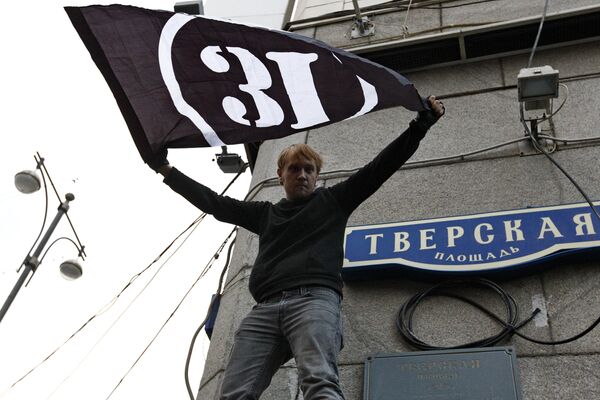 The lower house of the Russian parliament is ready to consider changes to the law on protests based on President Dmitry Medvedev's proposals, the head of the State Duma committee in charge of public associations and religious organizations said on Monday.

The lower house of the Russian parliament is ready to consider changes to the law on protests based on President Dmitry Medvedev's proposals, the head of the State Duma committee in charge of public associations and religious organizations said on Monday.

Last week, Medvedev imposed a veto on amendments to a law that stipulated tougher sanctions for those violating public meeting regulations set by the government. The adoption of the amendments by the Russian parliament triggered an angry reaction from the Russian opposition which has claimed the new bill would further restrict the freedom of assembly in Russia.

The changes prohibited those already undergoing proceedings for disorderly conduct during public protests to organize new rallies. In a letter addressed to the chairmen of both houses of the Russian parliament, Medvedev said the adopted amendments ran against the constitution, which guarantees the freedom of assembly. He agreed, however, that the law on rallies should be improved and ordered further work on the bill.

"We have already exchanged opinions with [our] colleagues from the Federation Council [the Russian parliament's upper house]. Given that the president has sent his remarks and proposed upgrading the bill, or - to be more precise - reworking it, we should create a special commission together with the Federation Council and representatives of the presidential administration," Sergei Popov told RIA Novosti.

"I think that this is a usual working issue. The president's remarks are clear," he added.

Russian human rights activists have praised Medvedev's decision to veto the bill which they said was against the "policy of openness which Medvedev tries to pursue."

Popov said both proposals of human rights activists and especially those made by the president should be reflected in the new bill.

"I think this can be done quite quickly. The issues there are not that complicated. The president gave us a tip in his remarks on how to resolve this issue. If the norms are superfluous and contradict certain [constitutional] positions, we should just remove them," he said.

In line with State Duma regulations, the amended bill will be considered as a priority after the previous amendments were vetoed by the president, the lawmaker said, adding that this new bill may be adopted as early as the end of November.