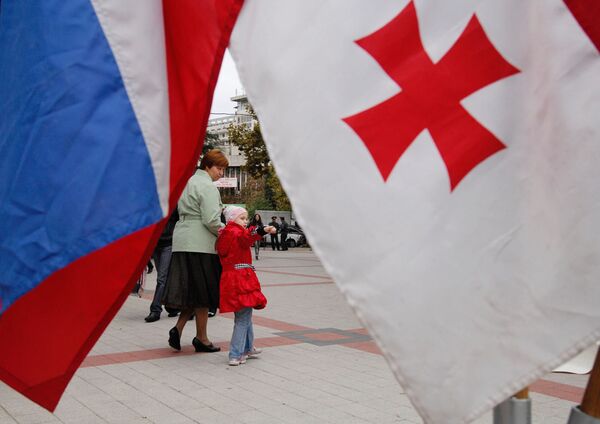 Those members of the Georgian leadership who stand behind the arrests of Russians over bogus spy allegations should remember that Russia will always defend its citizens, a senior Russian lawmaker said on Friday.

Those members of the Georgian leadership who stand behind the arrests of Russians over bogus spy allegations should remember that Russia will always defend its citizens, a senior Russian lawmaker said on Friday.

A total of 13 people, including four Russians, accused of spying, were arrested in Georgia, Georgian Interior Ministry said Friday adding that all of them were detained in October. Russian Foreign Ministry called the Georgian claims untruth.

"People who are not related to intelligence services and who have done nothing against Georgia have been arrested," Konstantin Kosachev, who heads the foreign affairs committee of the lower house of the Russian parliament, the State Duma, said.

"Mr. [Georgian President Mikheil] Saakashvili has at least two passions. The first of them is to deteriorate relations with Russia as much as possible, represent Russia as enemy of Georgia and Georgian people," Kosachev commented the bogus allegations.

Kosachev reminded the Georgian leadership the words of Russian President Vladimir Putin who has many times reiterated that Russia would always defend its citizens by all available means.

"The situation is very serious and those who have unfolded this provocation should realize this and remember and know that Russia would never leave its citizens in the lurch."

This is the latest in a series of spy flaps between the two countries since they fought a five-day war in 2008.

Two years ago, Georgia detained four Russian military officers and 12 other people on charges of spying. They were subsequently handed over to Russia.

In March 2010 a Russian military court in the North Caucasus sentenced a Georgian national and two Russians to 11-15 years in jail on charges of treason and espionage.

Long-standing tensions between Russia and Georgia, chiefly over the breakaway Georgian regions of South Ossetia and Abkhazia, erupted into conflict in August 2008. Russia recognized the two republics as independent shortly after the war.