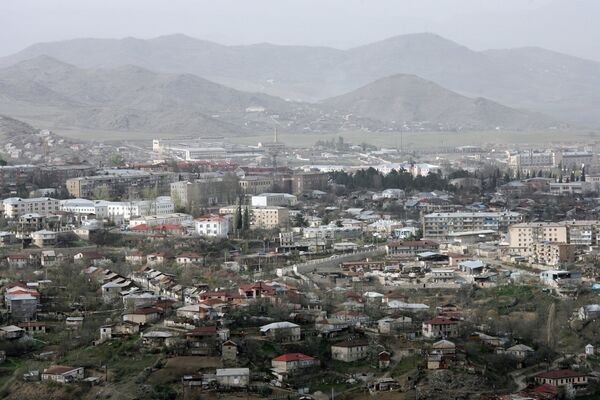 © RIA Novosti . Ilya Pitalev
/
Go to the photo bank
Subscribe
A draft resolution on the settlement of the Nagorny Karabakh conflict between Armenia and Azerbaijan has been withdrawn from the agenda of NATO's Parliamentary Assembly.

A draft resolution on the settlement of the Nagorny Karabakh conflict between Armenia and Azerbaijan has been withdrawn from the agenda of NATO's Parliamentary Assembly, the head of the Armenian delegation said.

Karen Avagyan said the talks on the conflict are held in the format of the OSCE Minsk Group, and Armenia earlier asked NATO to give up plans to discuss the Karabakh problem at the Assembly.

Relations between Armenia and Azerbaijan are strained over Nagorny Karabakh, a predominantly ethnic Armenian region. The conflict first erupted in 1988, when the region claimed independence from Azerbaijan to join Armenia.

In May, the Karabakh region elected a 33-seat parliament with a voter turnout of almost 68%. Azerbaijani officials called the elections "illegal," saying they could seriously harm peace efforts.

The OSCE Minsk Group, comprising the United States, Russia and France, was created in 1992 to encourage a peaceful, negotiated resolution to the conflict between Azerbaijan and Armenia over Nagorny Karabakh.