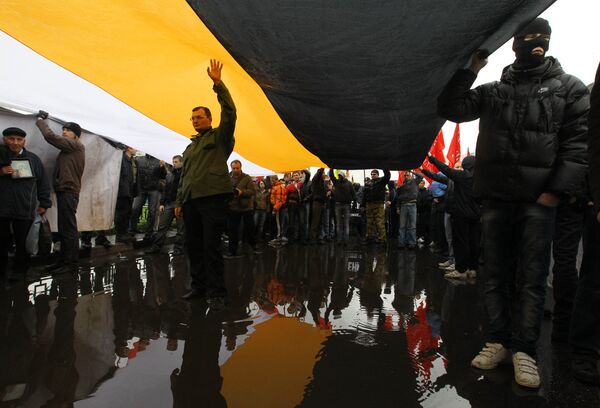 © RIA Novosti . Илья Питалев
/
Go to the photo bank
Subscribe
More than 20,000 young Russians marked National Unity Day on Thursday with a Russian March in Moscow to express respect for the nation's heroes and vent their anger at those who disgrace the country.

More than 20,000 young Russians marked National Unity Day on Thursday with a Russian March in Moscow to express respect for the nation's heroes and vent their anger at those who disgrace the country.

The participants of the march divided into two columns and paraded along the Taras Shevchenko Embankment near Kievsky Station. The first set of marchers carried portraits of Russian heroes - war veterans, young men serving in the army, and even the parents of some of the participants.

They were followed by a group with a banner emblazoned Shame of Russia and people who carried pictures of the country's anti-heroes, such as pimps, light-fingered businessmen and bullies. There were far more people in the second column.

At the end of the event, activists from the pro-Kremlin Nashi (Ours) youth movement issued a call to Moscow's new mayor, Sergei Sobyanin. "We ask you to use our power, our energy. We want our city to be the best, the most impressive, and we want to help," Nashi leader Maria Kislitsyna said.

The march was organized by the Federal Agency of Youth Affairs, Rosmolodezh.

About 6,000 police and interior troops ensured security and rule of law in Moscow during the Unity Day celebrations, which involved several other rallies in various parts of the city. Police said all the events passed off without any major problems.