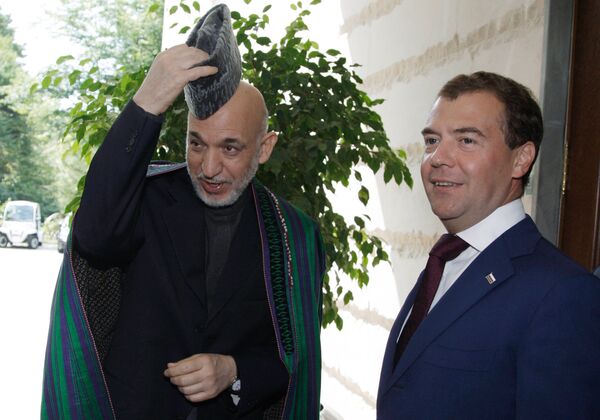 "Medvedev and Karzai noted especially the anti-narcotics operation held recently, which destroyed a large number of drugs and equipment for its production," the statement said. "It was particularly noted that the interaction of the counternarcotics agencies of Afghanistan, the U.S. and Russia was first worked out under this operation. The presidents called for further expansion of joint efforts in this direction and for increasing coordination."

The raid was earlier criticized by Afghan President Hamid Karzai, who said the operation infringed on the Central Asian state's sovereignty.

But Ivanov said that all the issues had now resolved with Karzari.

"Karzai called for further intensification of cooperation with Russia and increasing its role in solving Afghanistan's problems and the region as a whole," the statement said. "He expressed appreciation for the assistance in various fields provided by Russia."

Afghan drug production increased dramatically after the U.S.-led invasion toppled the Taliban in 2001, and Russia has been one of the most affected countries, with heroin consumption rising steeply.

An estimated 90 percent of heroin consumed in Russia is trafficked from Afghanistan via Tajikistan and Uzbekistan.

Russia and the U.S. will continue joint operations in Afghanistan to destroy drug laboratories after reaching an agreement with Karzai.